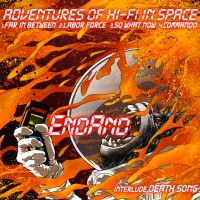 The Hi-Fi portion of the record kicks off with "Far In Between," trading off driving guitar lines reminiscent of "Green Album"-era Weezer and verses echoing the Cure. After the upbeat opening track, EndAnd slow things down a bit with "Labor Force," which has an even stronger '80s vibe initially, but juxtaposes very well with the aggressive break and shouted bridge at the end. While each song on Hi-Fi brings its own particular flair to blending styles and eras, the standout track is definitely the first single, "Commando," from the flashy guitar riffing to put Jack White to shame, to the gruffest vocal delivery on the album and the rock solid drumming keeping everything together. It's just a shame that "Commando" wasn't released at the peak of the Guitar Hero craze because it would have been a perfect addition to the playlist.

Lo-Fi sets itself apart right away with "Dawi," opening with slowly strummed discordant guitars and a repeating feedback loop that resolves into an off-kilter melody that wouldn't be out of place in Nirvana's discography. "Legend" continues with the slower pacing and darker harmonies, and though "Sweet" is more melodic the wall of menacing distortion layered underneath keeps in from being particularly uplifting. "When and There" closes out the album in almost shoegazy, sprawling style.

As a package, The Adventures of Fi in Space is a great introduction to a young band who clearly have a strong sense of place amid the current milieu of the rock canon.