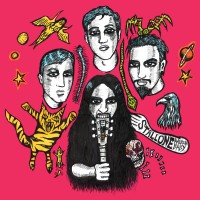 2012 shall hereafter be referred to as the Year of Torche. Whether we're discussing Harmonicraft or offshoots like Post Teens, it's been a good year for Torche fans. Keeping the streak going is Stallone, a new project from ex-Torche/current MonstrO guitarist Juan Montoya. The group's new EP, American Baby, brings the sludge, albeit in more of a '70s hard rock way.

The big difference between Stallone and Torche comes from the guitar solos. As an instrumental band, Stallone loves guitar solos, effectively making the group a chance for Montoya to show off and/or own faces. Indeed, American Baby is at its strongest whenever he gets to fire off a six-string salute.

Which also means that the EP is at its weakest when Montoya isn't in the foreground. The songs sound almost incomplete at times, as if they're begging for vocals. It's a minor complaint, given that the band gets to rock the body that rocks the party (and with a name like Stallone, how could they not?), but certain tracks, such as "Tight Like Tigers," go through long repetitive sections (and not in a cool, droning way) before they deliver the goods.

Still, American Baby is a strong sludge release with a dash of Southern rock sprinkled in. Maybe it's just a creative exercise for Montoya, but it still features some cool guitar work. Plus, the drums have this really nice thud sound going. Let's be honest; in the Torche universe, it's pretty dang hard to complain about the music.