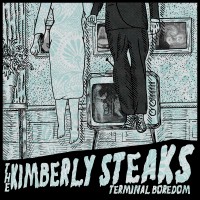 Ok, Scotland is probably a rising star (or slowly climbing up) in punk rock.

After their most famous punk rock export of this decade, the Murderburgers, a new band showed up and surprised me quite a lot. It's not everyday you get a punk band that actually reminds you of Fifteen and Jawbreaker in one band, and the Kimberly Steaks did it. Terminal Boredom is their second full-length album, and it appears this would have fit perfectly in a Lookout Records roster back in the early to mid-'90s, with a strong influence by Jawbreaker, FIfteen, maybe some early Green Day and Osker, Husker Du, some Smoking Popes..

Take, for example, their best song in the album, "Still Waiting." The beginning reminds me of Jawbreaker's "Do You Still Hate Me" and its chorus sounds like Green Day's "Christie Road," and it feels like it was sang by Jeff Ott. That's the best way I can describe that song.

The whole album sounds pretty refreshing, in my opinion, since it's pretty rare to find pop punk bands going into this style, which seems to be forgotten by this generation, and worth the download since it's available for free on their Bandcamp page. A must-listen before we draw the curtains on 2012, and it probably deserves to share the same spot for pop punk albums of the year alongside Teenage Bottlerocket, Joyce Manor, Hold Tight, Title Fight and co.

Civilian: Should This Noose Unloosen