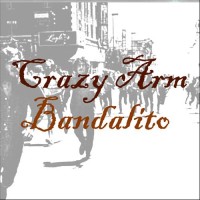 Crazy Arm has never been a band to be confined by what others might expect of them, and this was clearly evident when they followed up the excellent Born to Ruin album, which featured a big rock sound, with the more intricate and expansive Union City Breath. The latter displayed more influence from bands/artists such as Austin Lucas, 16 Horsepower and Woven Hand than any of the punk bands that might have led the band to write and record its debut long-player marking out new territory but without forsaking the element of rock that made Born to Ruin such a musical tour de force.

This three-track digital single, released to coincide with a lengthy European (mainland and U.K.) winter tour helps to keep the eclectic influences on show, with each song being radically different from the others. It's difficult to imagine many bands these days taking this approach and although some will favor the more upfront and in your face songs that the Devonian sextet deliver, one cannot fault the fact that this is a band that will not be pigeonholed.

If it is the in your face attack that you prefer, then "Bandalito" provides that more than any other Crazy Arm song. It is a frantic track which begins with Simon Marsh beating the living daylights out of his drums and from then on in the band sounds more punk than ever before with Darren Johns and Jon Dailey both making much use of their respective six stringed instruments. With Tim Parker-Rowing matching the pace using the four strings available to him, this is one hell of a bulldozing song. Despite that overarching, thunderous cacophony if you listen closely there is some wonderful Hammond organ within the song courtesy of Patrick James Pearson, which adds some depth and sanity to the exhilarating frenzy going on around it. Listen to this a few times and you'll be whispering "Bandalito" too.

"All Butchers Are Men" is an altogether different song, with a more medium pace throughout and one which effectively straddles the work from both albums. It comes across as more simplistic and straightforward, benefiting from Johns' excellent voice, backed by some quality musicianship from all concerned. The theme is one that is clearly a message of standing up and not being the kind of man that many seem to revel in being and/or are expected to be, especially in the way they interact with womenâarrogant, uncaring, unthinking, violentâthe list is, unfortunately, endless. When Johns sings "Men scare you / Yeah they scare me too" and "I'm not part of your brotherhood" they are hopefully refrains that more males can legitimately join in with as I find it desperately worrying how some males behave. This is the second outing on a single for this song in 2012 as it also featured on the B-side of the "Little Boats" 7" but is certainly worthy of being included again.

The third and final track is "Fossils" and here it's all about the most noticeable tangent that Crazy Arm has frequently taken which sees the band heading down a more country/folk path. This stripped down and mournful song is built around guitar and banjo underpinning Vicky Butterfield's soulful voice, which initially takes center stage on its own before Johns adds his soothing tones to what is a piece of work clearly influenced by the artists mentioned in the first paragraph above. For those with an interest in the band, songs like this one should not come as a surprise, given Crazy Arm's propensity for playing acoustic shows and also the fact that they are in the process of recording an acoustic album which should come out later this year. I'm hoping that this is a sign of what will be featured on that record.

This is one of those releases that really do highlight the diversity of a bandâeach song is significantly different and each is extremely well written and performed. This goes to show why Crazy Arm stands head and shoulders above most bands, well for me at least they do. If you're looking for a good introduction as to what Crazy Arm is capable of then look no further than these three tracks as it's there for all to hear.

The Coup: Sorry to Bother You