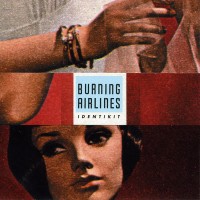 Given his legacy, it's hard to listen to J. Robbins' various projects without comparing them all to this biggest artistic triumph, Jawbox. That goes double for Burning Airlines. Formed right after Jawbox broke up, the originally band featured Robbins, fellow Jawboxer Bill Barbot and Almost But Not Quite Jawboxer Peter Moffett (He also did time with Robbins in Government Issue. Swoon!). Like Jawbox, Burning Airlines dealt in angular post-hardcore, so there's that too. And with the band's discography being re-released on vinyl by Arctic Rodeo Recordings as a benefit for Robbins' son, Cal, perhaps now is the best time to revisit the band.

It might not be the fairest comparison, but Burning Airlines could be considered a continuation of the more polished sound Jawbox was heading towards on their self-titled swansong. If anything, Identikit, Burning Airlines' final release, was the most commercial album Robbins made, despite putting it out on indie label DeSoto Records (which, lest we forget, was run by Barbot and ex-Jawbox bassist Kim Coletta. Robbins likes to keep it in the family).

Ah, but calling Robbins "commercial" might sound a little too damning. Robbins favors a clean singing voice and snarling, slinking guitars in his songwriting. Whether he's rocking out, as heard on opener "Outside the Aviary," or laying down a groove a la "The Surgeon's House," there's something very appealing in his approach. While the tunes occasionally get harsh, like with the guitar tone heard on "Paper Crowns," the record still drapes a slight sheen over the proceedings.

When people pit Jets to Brazil against Jawbreaker or the Kills against Discount (among many other examples), they focus on all the glaring differences. With Burning Airlines and Jawbox, it's better to look at the similarities. While Burning Airlines only managed two albums during their brief run, they still continued in Jawbox's footsteps and honored what came before. While the band toys with the occasional electronic textures, this still very much the style folks fell in love with years prior.