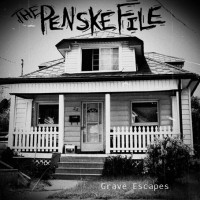 Ontario's scene has been rife with indie and hardcore bands stirring the underground, but the nice thing is a lot of them actually live up to the hype in the onset. The Penske File just happen to be one of them and a colleague shot me an email after seeing them open for No Use For A Name recently, and told me the crowd was stunned by how good these guys sounded. It didn't surprise me much as 2011's Young Hearts on Trial displayed a lot of potential. It was produced by John Feilding and Ryan Greene (NOFX, Strung Out), so I figured the follow-up should be good. It's awesome to say this new EP is short but fucking sweet.

Sienfeld jokes aside, this band has been at it for years underground and it seems they've finally found their sound. "Dormant Days" is atypical of the fun and quirky attitude of the band. The guitars are simple yet effective and there's a nice alternative warmth superseding their punk vibe. "Smash Apathy" is strikingly similar to the opener on this three-tracker and it's offsetting at first. But once you fall into that fun vibe again, it makes sense. They seem to love that summer/surfer/upbeat sound, and it's evident on their straining "Woah-ohs."

"Billboard Happiness" wraps the record up and there's a nice iteration of that '90s chord set that recalls light grunge and heavy alternative at times. You can nitpick all you want but the album is plain chill and fun. If you come in too seriously, you're looking in the wrong place. My only issue is it's too short. It's fun and then some...why so serious?

Peachfuzz: We Are Solid State