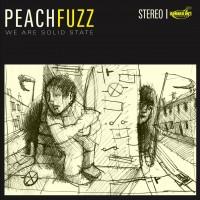 If you listen to this, the third long-player from Peachfuzz, then you might be surprised to read that they come from Bridgend, Wales and not some mid-western location in the United States of America. The reason being is that primarily the songs on We Are Solid State have more of a Stars & Stripes feel to them rather than anything akin to them embracing the Union Jack and it's uncertain which colors are being nailed to the mast.

This is evident from "Down to Me," which could easily be mistaken for a Social Distortion track from the opening guitar riffs as well as the Mike Ness-like vocals in the chorus. However, in the verses Adam Jones does a more than passable impression of fellow countryman Baz Oldfield (The Abs/Doctor Bison) to ensure it's not a total U.S. love in. "Close Enough" provides a similar sense of a more Americanized approach, mixing rock and pop sensibilities to produce a huge melodic sound with Jones' vocals coming across as a combination of Social Distortion's Mike Ness and Chad Price of ALL and Drag The River. This is generally the kind of formula that is applied from start to finish with the odd variation thrown in for good measure as Peachfuzz play to their strengths.

There are some good songs on the album and most are in the vein described above, including "Blood on the Moon," "Just Give Me Something" and "For Your Love," but for me the rare songs where Jones' Welsh accent shines through are the highlights, none more so than the epic eight-and-a-half minutes of "Oh Cordelia!". This track brings the album to a mighty end and here Jones' voice is occasionally reminiscent of Kelly Jones from the Stereophonics, which some may seem as a downside but it is a soulful voice with the ability to build a song into something even bigger and I say the comparison is meant as a compliment.

Peachfuzz know how to knock out some rocking tuneage that deserves a wide audience as there is no doubting its potential appeal to a more mainstream crowd. I find this whole album an enjoyable romp and I think a lot of that is to do with the fact that the band members obviously love what they do. I've seen them live once and despite it being an alcohol-fueled night I clearly remember being impressed by the passion and effort that was displayed on the stage and which has been translated onto We Are Solid State.

This is not breaking new musical ground but more a case of taking on board a number of clearly identifiable influences and working them into a highly enjoyable listen. The guitar work and Jones' voice, in whichever guise it chooses to use, help it stand out well above just being ordinary and this is well worth checking out if any of the above appeals to you.