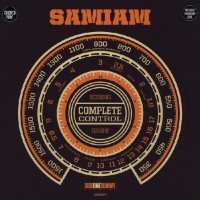 Samiam: a band that for many, hold a plethora of hugely positive memories and I am happy to count myself amongst that group. Those recollections include the longstanding, such as finding them supporting (unannounced) the Dickies in Bristol many years ago, to the more recent, again a Bristol show in 2011. Add to that a tremendous show in Berlin in 2005 and these are some of the reasons why this band resonates so strongly with me and why Samiam holds a place close to my heart for writing some of the most beautiful punk rock songs I've ever heard. Therefore, the news that the band was going to record a Complete Control Session for Joe Sibs' (head honcho of SideOneDummy Records) radio show and that it would also be released was music to my ears.

The six tracks featured are taken from three albums spanning 11 years, with the classic Astray from 2000 providing half of the content, 2011's Trips weighing in with two songs and finally, Whatever's Got You Down, from 2006, giving a single offering. Like many fans there would always be songs that one would like to hear under these conditions ("Capsized") but with a sizable backcatalogue making the decision to produce a set list of just half a dozen tracks must have been quite an arduous task. However, the result is well worth whatever process the band went through because as "Sunshine" (Astray) kicks in, it becomes quickly apparent that although Samiam does have some great recorded songs under its belt, in a live setting (albeit in a studio as opposed to an actual show) each track takes on a new lease of life, making it a different beast to that heard on the original album version.

I see this as the mark of a great band, one that is able to not so much recreate itself but in its ability to ensure that songs that must have been played hundreds of times still have the vitality of the original. That can be through ensuring that any of the more melancholy moments aren't forced and nor are the more expansive crescendos overblown into something that grates and doesn't fit in.

Up next is "Dull" (Astray again), one of my favorite Samiam tracks and here is the evidence of getting the balance right between hitting the right note for portraying the emotional content of the lyrics. The track listing then follows with "El Dorado" (Trips), "Wisconsin" (Astray), "September Holiday" (Trips) and "Take Care" (Whatever's Got You Down). This latter track comes from an album that, in my view, suffered from a really messy sound, but in this setting it is easy to hear what a wonderful song it actually is and I'm pleased that the band made the choice to include a song from that 2006 release.

Across the six tracks Jason Beebout's vocals often seem as if he is straining but essentially that's how he sings, putting himself on the line to convey his feelings and to ensure a heartfelt performance. The rest of the recording is a joy to behold and I recommend listening to this with headphones on to catch every little nuance of the musicianship that this release contains. Personally I marveled at how the guitars sounded across these tracks, with each chord and each note bringing smiles of happiness to my face as they rang out.

This is one of the best releases of the year and one that in less than 14 hours since getting the download version, I have managed to play at least a dozen times. This is fantastic stuff indeed and perhaps it's time for Samiam to consider a live album?