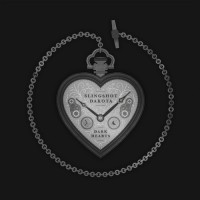 Carly Comando has always been a poetic, sincere and beautiful soul that's made Slingshot Dakota highly enjoyable and admirable. There's a sweet allure draped over the duo's indie vibe which gives a strong essence that I've personally felt in bands like The World is A Beautiful Place, Eisley and Straylight Run, but none of the latter could ever capture that sound so sweetly. Dark Hearts is a testament to Slingshot Dakota's ability to carve out genuinely touching and emotional anthems in the most altruistic manner. If you thought their past works were good, you're in for a great ride because this record is polished and fine-tuned to be their best effort to date. It's remarkable and definitely lasting.

There isn't that much vocals from Tom Patterson on the record, as he cameos in bits and pieces, but is highly poignant when he does. Instead he leaves Comando to weave her magic and she does so in leaps and bounds. The beautiful pianos and her wailing voice resonate on the stunning "Another Cigarette," which segues perfectly into "May Day." Patterson's drum beats on the record shows he's up to his usual A-game as they craft poetic waves into the indie vibe. It's cute and not annoying. Her voice matches her ambition–"We're waiting for our next mistake / We're living our days half alive / Will you wait for me?" shows her prowess and growth as a lyricist and in her voice.

Comando's already impressive voice improved, and I must compliment Patterson's drums and the standout pianos on the record once more. They complement her so well. "Gossip" represents that splendid bout of indie-pop while the subtle ballad "Disaster" had me in awe at the initial build of a WWPJ song ("Act on Impulse"). "Never Hear," the electric "Rasta Bacca" and "Starting Over" are prime examples of how a band should go about purposely crafting a record where every song is a hit. It's calculated, clever and a non-bore. Each song is brilliantly differentiated from the rest.

"Light" integrates the most soothing tone on the record. The same vibe is incorporated into "Living/Dreaming" and you can sense the subtle shifts in her voice tone. I once heard Comando mention the word "resplendent" on what kind of music she likes making, and here, she proves it. She wins in spades on "Cassette," which is one of the most endearing facets on the album. The final act of this song–"It doesn't really matter that much to me / Except when I think about your broken heart"–explodes into brilliance to emphasize the heartfelt emotion.

"Words" provides a most unique and eclectic drum set and acts as a good break from the other tunes. It isn't as cohesive as the others, with an intended slight dissonance, while still maintaining a cheery, lighthearted feel. Bethlehem, Pa. continues to be made proud by this duo. This song is the perfect way to cap a record that is steeped in sheer mysticism, extreme beauty and intelligence. The romance and elegant draw to Slingshot Dakota continues here for me with an album that proves their best output; no easy feat in itself. They've approached this record so patiently and it paid dividends. It's a stroke of genius and then some.