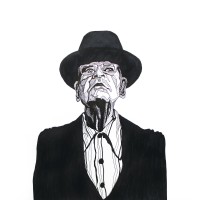 Dripping, the Bostonian quartet Pile's junior full-length, offers affirmation to the growing sonic and tonal shift in rock that takes cues from '90s alt rock, post rock and grunge. Throughout the album, thick guitars rip heavy chords that dodge mundane aspects with blue notes, off-key plucks and bemusing noises that add edge. A group that would do well on tour with Michigan's Cheap Girls, Pile daze out with a droned, pigeon toed dance.

The uninspired vocals and bombastic guitar interjections may be interpreted as an effort in art rock, however, such cleverness isn't apparent, as it is with the Teenage Cool Kids' Foreign Lands. This is more to the effect of a dawdling mind; the confused, yet emotive. Tracks like "Grunt Like a Pig" create the defining sound of Pile, fusing angry riffs, jazzy musings and lost vocals that run a gamut of ability.

The darker and atonal aspects of Dripping seem to speak as a reformed metalhead's rock anthem, or a punk's wayward attempt at understanding such sludgy genres. Pile's Dripping is so grimy and dirty that the smell of a sweat-beaten tee shirt is as much an influence as Torche or Mastodon. Amidst the clouds of darkness, silver-lined songs like "Bump a Grape" and "Sun Poisoning" offer accessibility to the faint of heart, breaking to offer light to fans of Fugazi or the Appleseed Cast.

While Dripping may seethe with rage-filled guitars and a perplexed pallet of tones, the group offers an unusually dynamic lesson in wielding power. Seldom comes such a fierce album that showcases disinterest and vulnerability. And with this defining attribute of Dripping, Pile is the rare sort of band that successfully manages to assemble a collage of sound and influence to regurgitate it as original, thoughtful and artistic work.