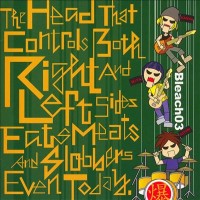 The Head That Controls Both Right and Left Sides Eats Meats and Slobbers Even... (2007)

A good band by any other name would rock just as hard. Such is the case with Bleach03. Originally just called Bleach, the Japanese noisecore trio had to resort to calling itself bleachmobile when first attempting to break into the U.S. due to a far less awesome Christian rock band from Kentucky who claimed dibs on the name first. As the band's profile rose a bit, the -mobile part got dropped and -03 got added. I don't know why, nor do I care. All that matters is that Bleach/bleachmobile/Bleach03 still rocks, as proven by the group's latest release, The Head That Controls Both Right and Left Sides Eats Meats and Slobbers Even Today. Holy crap that's a bitch to type out.

Fans of j-rock can expect more of the same from Bleach03's album, which isn't a bad thing. However, Bleach03 is always best the first time around, because the group sounds like three batshit insane Japanese girls fucking the shit out of Nirvana tunes. The result is harsh, beautiful and totally blindsiding.

There are some differences between The Headâ¦ and older releases like, say, the bleachmobile days of course. Bassist Miya's four strings sound less thick and grungy and just a tad bit more funky. The production overall is much cleaner, but doesn't tone down the band's intensity whatsoever.

There's a bit more diversity to be heard from Bleach03 now as well. Standout track "Torch" serves as a perfect example. A Cobain-esque dirty guitar line sullenly opens the song before turning all sorts of speed metal. Frontwoman Kanna actually sings beautifully throughout the song. Of course, there's also some shredding guitar and a militaristic bridge. All three members join in on tightly assembled vocals in a catchy, post-punk-y moment. Elsewhere, like on "Head Cleaner," the group achieves a slight Pixies-esque alt-pop feel. Catchy but weird.

Bleach03 still takes the time to tear shit up, though. The title track utilizes Miya's discordant howl over Kanna's high pitched singing, while drummer Sayuri picks up and drops half time beats on a whim. Grating in a good way, funky but powerful, The Head That Controls Both Right and Left Sides Eats Meats and Slobbers Even Today is a solid j-rock release and should appeal to curious fans of hardcore, metal and grunge.

Give Me Memphis: Fore