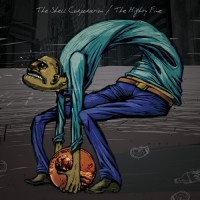 The Shell Corporation / The Mighty Fine

The Shell Corporation was a band I remember being promising. Force Majeure and Time and Pressure had a skateboard, rebellious punk feel but with an extra edge. Sure, you had your melodious choruses and "whoa-ohs" all over, but there was a little more punch to it. It's good to see their tempo, tone and vocal harmony haven't changed. "Ex-Parrot" is the typical punk anthem with thrilling guitar leads that play off smoothly amid the critique of the world and the calls for change. Yep...they go after the typical NOFX, Anti-Flag and Pennywise themes but they pull it off well. It's fun, quirky and got that subtle ska-hook to enhance its catchiness.

If you like the ska-feel, and are a fan of Bedouin Soundclash, then you're in for a treat. "Atlas Needs a Hug" is resonant in its sublime chords and when you listen, trust me, you'll get the gist of why this song is pretty fucking sick. It's purely genius. They've got a knack for crafting virtuous songs under two minutes and these teasers show that Shell Corporation are yet to take their foot off the gas.

The Mighty Fine did let me down slightly however. As a fan of Revival, I was expecting much more. I got great satisfaction from the vibrant "Weathered". It's a solid tale about reform and changing one's life...and came off pretty sweet. I recalled they sounded like an ambitious, yet watered-down Menzingers, but still a great band upcoming. Brook Thompson's vocal delivery hasn't changed; it's clean and poppy. He didn't exhibit any exploratory notions of getting out that pop-punk categorization much. Can't fault him for sticking to his guns but nestling into that comparable poppy voice may not be safe for him as many acts pull that off these days.

They need something extra and a bit more urgency to step out that pigeonholed sound as there's clearly a lot of potential here. I hope they don't cheapen and stay inside that proverbial box. I think if they cut loose, it's gonna be an indescribable success story. "Dead-ended", despite an impressive bassline, felt lacking and a bit rushed together. It seemed incomplete and showed that minor faults that were absent off Revival did indeed exist. Nonetheless, it's a cool split to take in and I'm sure we'd all be looking to future projects from both bands.