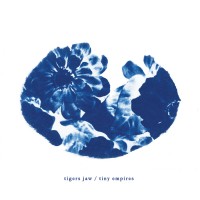 Like so many splits before it, the lesser-known band here (Tiny Empires, feat. ex-O Pioneers!!! frontman Eric Solomon) takes control and makes this a 7" worth purchasing. Both bands, however, were not afraid to give you the most possible bang for your buck, as the two sides have three songs each and combine for 16 minutes.

Opening with the Tigers Jaw half, it features their usual likable indie rock/emo/jangly selves, but there is a major problem with its overall production. The whole side is too shabbily recorded; the relative crispness of their last two full lengths is completely absent. Here, the vocals and bass are way too buried in the mix. "My Friend Morrissey" starts off well enough, and there's a great vocal melody in the chorus, but the Orange Juice-esque vocals are unintelligible. The next track, "No Mask," is the best song here. It surges at more of a consistent punk pace than usual for them, and features harmonies by keyboardist Brianna on the later verses, which are always a highlight in the Tigers Jaw cannon. "Haze Coffin" is a sour closing acoustic track, minimalist and irregular (not in a good way) it sounds as though it could have been written in a few minutes.

The album was delayed because the sleeves were pressed with Tiny Empires's old moniker, Black Clouds, who were threatened with a lawsuit by a band with the same name. A bummer for sure as this is their first official release, but it was worth the wait. They took full advantage of being on a split with a band much more popular then them: TE completely outshine TJ in an eight-minute, three-part suite entitled "Check Out My Boneyard/Interview With A Jampire/The Dream Is Still Dead." It rumbles as one long song rather than actually having three distinct parts, but logistics aside, this is great punk rock with a strong hold on dynamics. Solomon's gruff voice helps give extra gravity to his lyrics, admitting "Sometimes things change with the people you love / Sometimes you burn out on the things that you love / I know that I'm burned out and I know that I've changed." The song ebb and flows perfectly from quiet to charging to quiet to charging. This is a very auspicious way to debut your band and I'll be patiently waiting to hear where they go from here.

Swingin' Utters: The Librarians are Hiding Something [7-inch]