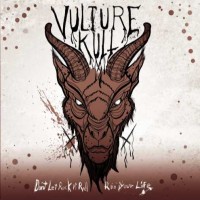 The Canadian prairies are, in the opinion of this West Coast son, like the barren mouth of hell. Flat expanses of nothing for as far as the eye can see. There are no mountains. So it's no surprise that the prairies are also home to some of Canada's more aggressive bands; they need to express the darkness growing within themselves through the magic of song like Julie Andrews, but with rock and/or roll.

This is never more apparent than on Don't Let Rock n' Roll Ruin Your Life, which is the second full-length from Saskatoon riff rock duo Vulture Kult. They bill themselves as "rock n' roll for the modern age" and they're not kidding around. This album is like Black Sabbath's Paranoid remodeled without all the fluff; just two dudes riffing hard and fast and howling songs like Ozzy about drinking ("Cyanide Hand Grenades") and the devil ("Welcome to the Land of the Dead"). There are hints of other styles that pop up here and there to keep things fresh, like the southern rock flair on the guitar lines in "Avenue H," and the percussive style throughout the album sounds like the Stooges. The two closing tracks also stand out, as the creepy ambiance of "Movie of Me" recalls Pink Floyd, and the instrumental "Checking Out" is like a sad surf rock song. But on the whole, this is a rocking affair that aims to make you "Go Loose."

Vulture Kult just came off a small Western Canada tour in support of Don't Let Rock n' Roll Ruin Your Life which kicked off from their album release show Sep. 15. It looks like things are only looking up for them as they continue the shake the prairies with their modern brand of straight ahead rock and roll.