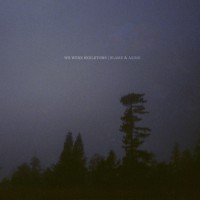 I was impressed with We Were Skeletons' self-titled a couple of years ago and wondered if they'd be able to replicate and build on that impressive sound in a time where so many screamo bands were sounding the same. Thankfully, they've managed to build robustly on that foundation. With the right doses of slick guitarwork and an infusion of solid drumming tapered over Justin Pallas' emotional angst, WWS once again managed to stand out in this genre.

Pallas impresses a lot, as he doesn't saturate the record with anguished and dizzying screams, but switches tactfully into a soft, curtly, coarse version of pseudo-wordspeak at times. I can see why fans of TouchÃ© AmorÃ©, La Dispute, Saddest Landscape and Caravels also held WWS in high regard. "Long Night" has that emotional hardcore sound bursting at the seams, which permeates prominently throughout the record. This song's tempered with chaos, but like much of the record, there's a hardcore melody amid the aggressive rhythm from time to time. They pull off the balancing act neatly and while the raw, sleek shredding guitars of Pallas act as a main strength, it's drummer Matt Nissley that really makes the album click to me. His percussion highlights the nimble, riffy and stop-start style of Pallas perfectly.

"The Buried Set" demonstrates once more how much Nissley's drumming accentuates Pallas' impressive guitars, to the point that you find yourself zoning out on how potent his beats and double-kicks sound. They manage to throw in soothing instrumentals such as "Blame and Aging" to add respite now and again, and give the record time to breath and sink in. "Disease Artist" is chilling yet compelling while "Again, Disappear" reiterates how good they've manged to stamp their post-hardcore influence onto the album.

"Slow Death" contains a ripping and powerful bassline from Rafael Diaz and with Nissley's drums once again proving stellar on "Tremors," you're reminded that you're justified in purchasing this album. After hearing them praise At the Drive-In and mewithoutyou as influences when they were on the road, a lot of little intricacies in their sound start to make sense. WWS really managed to coat and pay homage to a lot of these influences, even from Fugazi and Shotmaker, in the record. They've come a long way from their callow and unpolished sounds while retooling languid effects and the proverbial melancholy of screamo, all packed neatly in their stockade.

It isn't perfect and has a few flaws, not so much in production, as in a couple tracks, even one or two instrumentals, feel like unnecessary filler. I do think one or two songs less could have helped carry the momentum of the stronger tracks but those minor issues aside, I think WWS have delivered another solid record. They've gone from strength to strength and I can't wait to see what's next for them.

And You Will Know Us By the Trail of Dead: Lost Songs