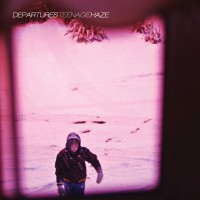 I thought Scotland was only good for We Were Promised Jetpacks and Sir Alex Ferguson. Departures prove me dead fucking wrong. I took a listen to their full-length debut When Losing Everything is Everything You Wanted and by the time I listened to this sophomore effort, I was beyond blown away. Teenage Haze is gonna be a record that is talked about for quite some time.

Yes there's a similar sound to Pianos Become The Teeth, Caravels and Saddest Landscape, but there's something different when it comes to influences as opposed to ripping off or copying other bands' styles. Departures has post-hardcore screamo vocals that James McKean pulls off well, but it's their musicianship and additions of alternative and melodic hooks that prove beyond a doubt of how good they really sound. "Drained Out," "The Home Stretch" and "Planting Weeds" display their knack, and incorporates the amazing guitars of Andrew Traynor and Daniel Nash, to grand effect.

They've submerged themselves into a genre where many bands sound the same, but really aren't. This versatility in their instruments gives them a range that's highly diverse yet manages to encapsulate all the worthwhile characteristics of the genre. PBTT gave The Lack Long After around this time last year and it proved to be the record of 2011 to me, and here, songs like "Those Miles Meant Everything" and "21" aspire to do the same. It's like Glasgow's own version of Defeater, but with their own distinct take.

The lyrics are gut-wrenching, heart-breaking and the overall emotional angst in McKean's coarse voice is undeniable in its honesty. Their knack for habitual calm comes off well in "Where Will the Time Go?" as it mixes aggression and chaos with the lull of a ballad in the intro and this kind of band can convert habitual hardcore listeners. They're that good. I think it's a great album to be blindsided by and it's a great touchstone for No Sleep to add to their roster...yet again. The sonic signature left is burning from Departures, and I can safely say, this is gonna be on repeat until the New Year. It's no doubt a contender for record of the year.