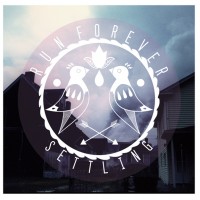 If you remembered how amazing "Young Pioneers" sounded, then you're in for something special here. If you hoped that Run, Forever wouldn't lose their steam a few months down the line, you're gonna be pleased. Settling emphasizes how far they've come in such a short space of time as they've continued to blossom since their days strumming on Solidarity Records. It's a vibrant and charismatic record that goes beyond past themes of growth, renewal and acceptance...and it's something the late Corey Wolfram would be proud of.

Anthony Heubel's vocals are an audible spectacle in its honesty and the admirable deliveries, with the most earnest lyrics, echo on songs like "Good Enough," "Sun Bruised" and "Basement." The latter pays homage to the days of toil, tears, blood and sweat in basement shows and adds deep value in its throwbacks. The tireless melodies resonate through his nifty guitars and it's resounding how he's prolifically backed up by Cassie Staub's basslines. This band has always been a specimen of profound grit while meshing in bits of folk rock. They always seem to do this in fine form.

"Settling" and "Braddock Beach" are beyond brilliant tunes that once again demonstrate how good these guys are all-round. "Maritime States" has a neat, unpolished start-stop punk feel to it which allows Tom Moran's drum to sound as tight and crisp as expected. He's spot on throughout the album and the likes of "Postcards" cement just why Pittsburgh is proud of these guys. They have a power, enthusiasm and quavering energy that help nullify the few songs on the record that didn't stick on me.

I like the direction they've taken and the concept of moving forward to newer things. They've remained unpredictable in a good way, which keeps them resolute and fresh in the game and ready to keep bringing that A-game. I can't wait to hear more from Tony and the guys.

Math the Band: Get Real