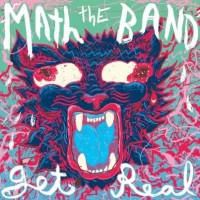 Math the Band have given me more nosebleeds from rocking out than any other musical group, and for that they deserve credit.

Nevertheless, on paper, it's easy to see why some people quickly dismiss MTB: we're talking electro-punk spaz-core of the most colorful variety, packed tight with heart-stoppingly hyperactive tempos, sugary synthesizer melodies and a perpetually cheerful (and frequently nonsensical) party mentality worthy of Andrew W.K., all of which being performed by an aggressively adorable boyfriend/girlfriend duo. I felt annoyed just from typing that. Unlike many of the indie musicians following in the footsteps of Atom and His Package, however, Math the Band are not just the only ones who've proven worthy successors but have cultivated a strong and unique identity of their own, bringing the aforementioned elements together in such a way that what should be theoretically obnoxious (much like A&HP often was, IMO) actually turns out to be sweetly charismatic, energetic and really, really darn fun.

Get Real, MTB's eleventy-twelfth album, follows 2009's similar ode-to-ADHD Don"t Worry, but it isn't merely a stylistic regurgitation. The strides that MTB have made in songwriting are really quite remarkable for what could be a potentially limiting formula in the hands of lesser musicians. I hesitate to use words such as "restrained" or "mature" as Get Real has its fair share of sugar-rush hyperactivity and unapologetic silliness, but it doesn't beat you over the head; the overall productâthe instrumentation, arrangements and production qualityâis altogether tighter, fuller and far more confident, making for stronger material and higher replayability (a crucial necessity for "novelty" music). It not only surpasses Don"t Worry, it likely surpasses a good amount of the Atom/AWK material which influenced it. I won't claim to be remotely knowledgeable about the underground synthpunk scene, but I'd be willing to state this is by far one of the best examples of such. Really, the only complaint I can muster is my personal objection to the occasional profanity as I feel it offsets the positivity of the music, but I'm just prudish that way. In fact, I have absolutely no idea why I frequent a punk rock website.

Much like hairless cats or pictures of babies in flowerpots, Math the Band is one of those things which is just so pure and positive that it can crack anyone's shell of cynicism if they open themselves up to the experience. Hey, if it can get through to a nihilistic sociopath like myself, then there's got to be some merit to it. It may not be high art, but it's relentlessly fun and gives you all the buzz of snorting Pixy Stix without the deviated septum. Check it out and be sure to catch MTB on tour.