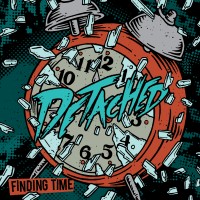 Having lived in Caerphilly, Wales for a couple of years I can vouch for the fact that beyond it being (in)famous for the whole Sex Pistols thing in the 1970s, it's not made the biggest mark on punk rock over the years. However, last year I managed to catch Detached when they played in Plymouth, and their youthful and energetic punk tinged with ska was rather infectious.

This, the band's debut album, is by no means one of those stand out records that we all hope to hear but it's actually a pretty good release which makes good use of some added brass (which bring to mind Less Than Jake) and not too much of the trademark chicka chicka guitar sound that is synonymous with ska and, to my mind, only needs to be applied sparingly.

What I find enjoyable about this record is that it is a predominantly punk sound so the ska doesn't take over but it does add something to the music when it's included. Also on the CD, the gaps between tracks are barely discernible so the whole thing seems to flow pretty well. Lyrically the band covers areas such as being thankful for friends and family around them, plus also in "Forge and Hammer" (which I believe is a pub in Machen a village a few miles down the road from Caerphilly) as Rhys Mence sings "I'm gonna find my way back home / Where it feels so right." It reminds me of however crappy one's hometown might be (and I was born and brought up in nearby Newport, which has very little going for it, but I love returning there when I can) it still often holds a special place in your heart.

Detached manage to write catchy songs, so much so that some of them had me singing out loud as I was listening to this on my MP3 player on the way to work (I would add that I was walking through a large deserted park at the time) with some excellent intros as well, and overall there is quite a vibrant feel to the whole album.

In terms of musicianship, the guitar work is strong with big chords driving the songs along aided and abetted by a bouncy bass and a solid drumming performance from Josh Clark (who certainly knows his way around a kit). The one departure from the more direct punk/ska approach comes in "Ride it Out," a dub/reggae track that changes the pace for a few minutes but it's not long before the guys work it up a few notches again.

I don't want to dissect this too much as on the whole it's a good album which I enjoyed, and will continue to enjoy, listening to: further analysis will not add anything negative or positive to this review. I'd just say to go and check out this band for yourself. One final point, the artwork is easily identifiable as the work of Horsebites, a.k.a. Richard Minino.