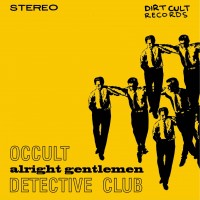 I'd recently seen the name Occult Detective Club being bandied around on social media sites and thought that it was possibly some kind of pretentious and foppish indie band, being supported by a major label with sparkling press back up from the likes of NME and Spin. However, when a few trustworthy acquaintances also started mentioning the band and I read a review by another person whose views I respect, I thought I should perhaps take note of this oddly named combo.

That note was duly taken, and if there's a musical equivalent of love at first sight then this happened to me when I listened to that initial handful of tracks on Bandcamp. This couldn't be any further removed from my original impressions based purely on the name of the bandâthere's nothing affected here, with the music having its roots in punk rock but also managing to convey some of the bands like the Jam, which used a lot of melody in their songs.

The Ramones kept music simple and Occult Detective Club obviously believe that that approach was good enough to continue with. Chords are used sparingly, the bass and drums don't overcomplicate the songs and the vocals are delivered in a hurried way which makes you feel that it was a first take kind of job in the studioâthey also sound like a slightly gruff Elvis Costello, if that helps. Occult Detective Club do move things on from how the Ramones began their career, but only to provide the benefits that come from having a twin guitar attack, helping to broaden out the sound a bit with some well-placed leads, and by making use of improved production technology, which fortunately is used with a light touch.

The four tracks on this single all manage to convey a band comfortable with its abilities, and to be fair with two albums and a split 10" (all of which I've bought in the past five days) under their belt you wouldn't expect anything else. Opener "Alright Gentlemen" does a fine job of highlighting the abilities of the band, with some great use of no more than a handful of chords.

"Sad Kids" begins with a revved up Ramones-like intro before moving into a slightly more refined (if punk/rock can ever be deemed to be refined) song full of hooks aplenty and melodies galore. Despite this potentially more elaborate approach the music still retains an inherent primitive quality rather than coming across as overly full with the individual musical parts. I also hear bits of early Screeching Weasel here which also shows that this is not a convoluted methodology but an effective use of what is at hand.

"New Heart" again provide some choppy guitar and does have hints of the Jam in it at times whilst the closing track "The President Says" has a frantic opening lead guitar and slows slightly before ramping itself up again nicely with some great sing-along parts. This song contains slight shifts in pace that are done extremely well, without it losing any of the energy that permeates this and the other three songs.

Occult Detective Club is one of those bands which can take something old and combine it with its own characteristics with an end result that causes the listener to feel as if they've been unexpectedly blindsided by something very good. There are few bands that have caused me to pick up as much of their work as quickly in recent years and that is all down to the quality that shines through. This record, no, this band has longevity in its sound, and I fully expect it to buck the trend of a lot of music which suffers from the law of diminishing marginal returns in terms of the pleasure gained by each additional play of the release.

Joan of Arc: Joan of Arc, or Charlie Chaplin and The Elephant Man