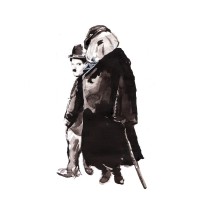 Joan of Arc, or Charlie Chaplin and The Elephant Man (2012)

Tim Kinsella may just be the most prolific artist in independent music. Having performed in nearly a dozen bands over the past 18 years, half of which he's fronted, Kinsella has built a legacy of artistically genuine and overwhelmingly creative output, most song-writers can only dream of. With Joan of Arc, or Charlie Chaplin and The Elephant Man, the latest LP from Joan of Arcâthe moniker for which most of his sonic work is attached to, and the group's third full-length album this year–Kinsella sets out to challenge the boundaries of minimalism, deliberately holding back on unnecessary layers of performance that may burden the simplistic narratives present on the album.

Mainly an acoustic affair, the record features nothing more than an acoustic guitar and Kinsella's instantly recognizable and scattery vocal melodies, save for a lone bass drum and the addition of four additional acoustic guitars on the album's closing opus, "Chaplinesque."

Out of the record's seven tracks and 34 minute run-time, it's interesting to note that contrary to what has historically benefited Joan of Arc, it's in the three shortest tracksâeach under two minutesâthat we find the most engaging and well crafted compositions of the record. "King Song," the most notable of these, adapts an Elvis Presley melody into a series of brief, independent verses whose matching hooks complete their respective lyrical statements, concisely capturing the essence of desperation, which Kinsella says is an allusion to Presley himself.

Throughout the course of this album, the guitar proves to be a stellar companion to the traditional folk themes of toil and drudgery as a means of storytelling. Playing rhythms likely expected from Joan of Arc's full-band recordings, the guitar plays complicated and fragmented riffs, often interrupted by powerful and fully strummed chords, while maintaining full control of the strings, avoiding any hint of sloppiness incurred from over performing. More than anything, Kinsella's virtuosity with an acoustic guitar comes out in full display on Charlie Chaplin and The Elephant Man demonstrating his dexterity as a fluent musician, not restricted to the performances of others.

Although it would be disingenuous to categorize this album amongst Kinsella's finest, though it is undoubtedly very good, it more practically serves as a stop-gap release, designed to tide over even the harshest of critics until Joan of Arc's next proper album.

Kylesa: From the Vaults Vol. 1