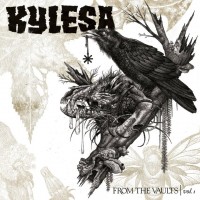 For a band as prolific as Kylesa (five albums in nine years, plus a metric poop ton of splits and 45s), it's odd that they would just now get around to a rarities comp. Then again, given that they titled it From the Vaults Vol. 1, perhaps this is just the first in a long series. Either way, coming after mainstream-baiting psych-sludge experiment Spiral Shadow, it makes for a nice overview of where the band's been.

Admittedly, Vaults is a little padded. Of the 12 tracks, two are covers (Buzzoven's "Drained" and Pink Floyd's "Set Controls for the Heart of the Sun"), two are minute-long instrumentals ("Intro," "Bass Salts") and three appear on other albums ("A 110 Degree Heat Index," "Between Silence and Sound" and "Bottom Line"). All the same, the more obscure material, plus new track "End Truth," give an overview of the band's style that might actually be the best introduction for new fans.

Closer "Drum Jam" is all in fun, but it also shows how downright tribal Kylesa got on Static Tensions. Catchy fare like "End Truth" and "Paranoid Tempo" would have been perfect for the first half of Spiral Shadows. But there's also dissonant shredders like "Inverse" that would have ruined eardrums perfectly if sandwiched somewhere on Time Will Fuse Its Worth.

In terms of fidelity, the revisited tracks sound better here. Of particular interest is "Bottom Line." Already one of the stronger tracks on sophomore effort To Walk a Middle Course, the song sounds fuller and heavier here. The Buzzoven cover flies by despite being five minutes long, but let's be honest; the big selling point in press materials was the Pink Floyd cover, and it's positioned in prime real estate as the closing epic before "Drum Jam." Nearly seven minutes in length, this version amps up the aggression considerably. While the players keep some ambience, Kylesa cranks up the energy on what was originally kind of a pretty, haunting tune. Classic rock informs many a contemporary rock band, but ya just can't take the sludge out of Kylesa.

Serving as a stopgap while Kylesa finishes up their next full-length for 2013, From the Vaults is actually a pretty darn good rarities comp. There's no filler, and even the most readily available tunes sound better here. Hopefully, unlike, say, Shaq Fu, there will be a sequel.

Joan of Arc: Joan of Arc, or Charlie Chaplin and The Elephant Man