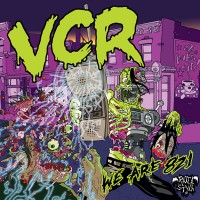 Does the world really need another Misfits cover LP? The answer is yes. Hell yes. Oh hell yes. The problem with most cover comps is that the band just a does a straight, or almost straight cover of the songs in questions, thus making them immediately irrelevant and trite. Why listen to [INSERT YOUR GENERIC POP-PUNK BAND OF CHOICE] cover the Ramones when you can just, you know, listen to the Ramones? Trying to out-Joey-Ramone Joey Ramone might be laudable ambition, but the Icarus who tries this will have his wings fried every time. Likewise, covering someone as unique and influential as Danzig/Misfits might show resolve, but it's a dangerous game. Play it too hot, and you sound like a parody of the man. Play it too cool and you just fall flat. But, that's where the now defunct VCR plays it smartly. Instead of going for a straight copy, on We are 821 VCR uses Misfits tunes as templates for their own sonic exploration, which both maintains a healthy respect for the source material but also draws enough of a distance for them to be evaluated on their own.

Now broken up, VCR started out as a sort of synth-punk/new wave act that supported their sound with a healthy dose of '80s Devo-style space music. In 2006, they released a limited run cassette of all Misfits covers done in their synth-punk style. RiotStyle's vinyl re-release is pretty much a straight re-release of the cassette in new format, and really, the recordings show it's good to keep the tunes in circulation.

Chiefly, the band replaces the Misfits' heavy, murky, energetic guitar and bass strikes with a pair of synthesizers. The result is that the songs retain their early punk energy, become a little bit lighter, but have a fitting '50s b-movie sci-fi spookiness.

These reworkings work surprisingly well. Instead of sounding arbitrary, or in the alternative, of seeming to be bland copies, these new synth arrangements show how strong the original composition of these songs are, as well as allow for new insight into how these songs can sound. Interestingly, with the sound changed, even the lyrics seem to have different meaning. Wisely, vocalist Chad Middleton opts for a Danzig approximation, and really, he's the best Danzig impersoantor I've heard to date. By altering the music so much, but anchoring the vocals in blues/doo wop howling, the band creates some of the most interesting, and daring, Misfit covers to date.

The music really hits its stride when it uses the songs as springboards. Namely, on "London Dungeon," the band starts with a faithful synth-punk version, only to end it with a "synth jam" which extends the song, and the feeling, and makes the music entirely new, though still referencing its roots.

Further, perhaps coincidentally, is the fittingness of the reworkings of the music in this format. As I'm sure you are all Misfit-reverents, you know that the band originally started out as sort of a synth-punk band with the original Cough/Cool single. Perhaps by choosing to make the songs in a synth-punk style, VCR is acknowledging the Misfits earliest history. And if they're not, well, at least the core strength of the band and their source material is on full, robotic display.