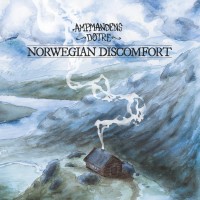 Norway's Ampmandens NÃ¸tre sound like Black Flag and Refused with some sludge metal thrown in. Just so we're clear: Ampmandens NÃ¸tre is super good. The group's new full-length, Norwegian Discomfort, boasts 12 tracks of grooving, thrashing, yelling tunes that also incorporate a dash of humor. This band is clearly having more fun than you.

Opener "Na Zdravi" is basically 67 seconds of dudes screaming gibberish while assaulting their instruments. It's awesome. It also bears a resemblance to Songs to Fan the Flames of Discontent, so, yay. Indeed, the record almost seems designed like two EPs. The first side is primarily hardcore-oriented.

"1389," the last track of the first side, serves as a bridge, literally segueing from hardcore to sludge metal halfway through. "Nailin Palin" dumps a whole mess of sexist insults on politician-turned-TV-personality Sarah Palin, and I would take issue with that if it weren't, you know, a song about how Sarah Palin sucks (although the chorus about sodomy does get repeated just a little too much for the joke to hold up). This second side finds the band exploring the groove more, by which I mean the songs actually run past 90 seconds.

Brevity is the soul of Norwegian Discomfort. The record gets in and out before becoming tedious. It treads this fine line between sludge and hardcore, serious screaming and winking jokes. It is, in every sense, a fun record for goofy headbanging. While the band hints at being more than capable jammier, sludgier material, Ampmandens NÃ¸tre sound best here, coming in at just under 24 minutes.