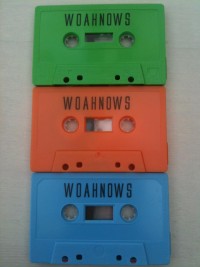 Woahnows are a three-piece from Plymouth, U.K., which is now following up its debut release earlier this year on the split digital single with fellow Plymouthians the PJP Band with this neat little five-track cassette/download. I'm no stranger to these tracks as they've been on Bandcamp since September, causing much excitement ahead of a proper release and they've taken on quite a position in my listening pleasure in the intervening months.

The main thing that I find appealing with the Woahnows is that the band has the ability to come across as fresh and exciting despite the fact they are not doing anything particularly revolutionary with their music. The songs have their roots firmly based in punk rock and they are boisterous efforts to boot, yet the band is not afraid to slow things down momentarily to add some variety as in "Packets of People," perhaps the most atmospheric of the tracks.

Additionally, for good measure, there are hints of Jawbreaker at times (this struck me more when seeing them play live) and one might consider minor similarities between the vocals of Tim Parker-Rowing and Blake Schwarzenbach, but the overall impression is of a bunch of newcomers on the block, with all the right ingredients to allow them to concoct and deliver five cracking songs. These ingredients are measured to perfection in the mix and the end result is a highly satisfying dish of an indie/punk fusion nature.

Across the release, Parker-Rowing's edgy and intoxicating riffs, Dan James' pounding bass and Adam Wherly's intricate and precise drumming create a musical backdrop that is begging for lyrical content to maintain the quality of the band. Fortunately, this is not a problem and Rowing-Parker delivers lyrics that display clear evidence of thought and consideration being put into the messages contained within them. I do find it pleasing to hear a band that manages to put effort into both the music and the message, as often one without the other leaves me feeling a bit empty. It's great to have catchy songs like "Go" and "Collective Aspiration" (my favorite of the five tracks on offer) but it's even better to have some depth to the actual content too. The lines that leave the most of a mark, though, come from "Poor Greedy People," in which Rowing-Parker sings "If these are the facts / You better be scared / I could read and learn / Or drink and forget," clearly identifying the choice often faced of self-education or chosen ignorance in respect of issues/problems.

I will openly say that I find this retro step back to cassettes somewhat confusing. The medium had a use back in the 1980s when tapes were flying around the globe, allowing listeners to hear bands that were thousands of miles away, but it was far from being the perfect way to listen to music given the ease with which tapes could be "broken." Regardless of my thoughts on the medium of this release (it does come with a download so don't be put off if you don't have the facility to play the tape itself), there is no denying that Woahnows is one of the best new bands of 2012 and one with a bright future ahead.