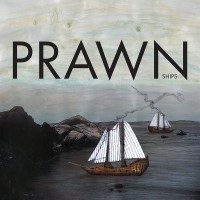 If you enjoyed 2011's You Can Just Leave It All and 2009's False Institutions, then I think you'd be in for a treat. There's no sense jabbering about the recording here and then at the end telling you it's something you NEED to get. I would rather tell it up front as this record really is one of the most pleasant listens I've had in a while.

Whether it's indie, alternative or emo...whatever it is...Prawn has not lost its touch. Tony Clark's vocals are really stellar and with such a good voice, combined with him aiding Andrew Vilchez on some nifty and intricate guitarwork, it is hard to not fall into this album and emerge pretty receptive of it. I think fans of Tigers Jaw would most appreciate this EP, as Prawn really offers a sense of endearment on almost each track.

Whether it's about friendship, lost romance, hope or love, this band really does it well. "Costa Rica" and "Grass and Bones" are neat openers that really push the alternative vibe, and while the crafty guitarwork helps smooth out the record, Clark really shines with his disposition. It's funny how Prawn does it simple–really simple–yet their records are fun and effective. It's bubbly and, well, more bubbly, but never gives too much of that pop-punk vibe.

If you liked Joyce Manor's last couple releases, I also think you should be giving this a go. Fans of Koji, Title Fight, Defeater and Into.It.Over.It would find themselves something new to like. The instruments remind me of the last album from instrumental band Enemies but again, Clark really makes the songs stand out. "Donald Domesky" follows suit–"We hold on to what we can / If I can only remember what we said / Something along the lines / Of how time sets us off"–by proving how charismatic and charming the alternative feel is here. "Spring Feel" is the softest but most powerful track I found here, something really special.

By the time the final track, "Praxis," rolls around, you've gotten a earful of awesome; yep, that's the typical immature way I can put it, which doesn't make it any less true. Prawn keeps on being amazing. Listen to the EP.

Two Gallants: The Bloom and the Blight