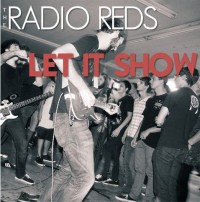 While four songs isn't really enough to draw any conclusions, Radio Reds come out strong on their debut EP, Let It Show.

The band bills themselves for fans of Pegboy and Samiam, but the group has a decidedly more "post-punk meets modern alt-rock vibe" on the first two tracks, "Lucky Strike" and "Disconnected." "Lucky Strike" specifically stands out: it sounds like the kind of song the Foo Fighters might make if they worked with J. Robbins. Elsewhere on the album, the band tosses off some well done pop punk on "Bedroom Noise."

The problem with Let It Show, as much as any four-song EP can be said to have a problem, is in push-pull of the production. The instruments have a decidedly lo-fi feel that fits the songs better than the big-pop vocal production on lead singer Stephen Kent's vocals. A little mud could go along away, especially on "Disconnected."

There's another song, "California Snow," but the less said about that one, the better.

Instead, let's focus on a promising EP from Radio Reds and hope that their punk sensibilities beat out their alt-rock leanings.

The band's EP is available here