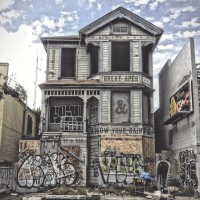 So, this split by Great Apes and Know Your Saints is not bad.

Great Apes have a sort of post-hardcore-lite thing going on that I wouldn't mind hearing more of. Of their two songs, I'd give a slight nod to "The Quack and the Leper Master," which features a pretty sharp little breakdown leading in to the chorus that makes my heart happy. This isn't Bear vs Shark, this isn't At the Drive In, this isn't even the Constantines, but its a close enough cousin that makes me think there is some real potential here.

The Know Your Saints half of the split is a little tougher to talk about. See, in a vacuum, their two tracks "Skyscrapers, Smokesignals" and "Deconstruction" are the better songs. Here's the rub, though: we don't live in a vacuum and it's impossible for me to listen to these songs and not hear them for the Lawrence Arms (that'd be "Skyscrapers") and Banner Pilot ("Deconstruction," natch) ripoffs that they are.

Let me take a moment to address the band directly.

Now, I'm not trying to be a dick here, Know Your Saints. I really like both of the songs you put on this split and I don't begrudge you for trying to ape your heroes. That's what all the good bands do: you steal from the greats and use their bones to make your own songs. Eventually, your songwriting comes full form and you don't have to look to your influences as much. However, there is a difference between "looking to your influences for guidance" and "almost totally aping style and sound" and I'm afraid you guys just came down on the wrong side of it this time around.

If nothing else, the split serves as a good introduction to both bands and suggests that Great Apes and Know Your Saints could be groups to keep an eye on in 2013 and beyond. In this late 2012 hour, however, it still sounds like both bands are trying to find their sound.

Placeholder: Thought I Would Have Been Somebody By Now