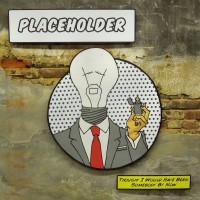 Thought I Would Have Been Somebody By Now (2012)

After scrambling to find a copy of Nothing Is Pure, I could tell that Placeholder had a lot of potential. How they evolved from their older sound and lineup to now was something I couldn't anticipate because they're a band I literally just took in on the weekend. One of the best choices I made in a while. This EP stands too short at four tracks with its laid back, unrefined punk essence that's topped off nicely by frontman, Brandon Gepfer, who's got a very interesting aura to him.

Gepfer and Marco Florey both played in Handguns and while Florey's as consistent as expected, Gepfer really impressed much more than I thought he would have. I was familiar with Florey's work but Gepfer's lazy delivery and gruff, coarse vocal tones work pretty sweetly with their sound. He's claimed Elliot Smith as a musical influence in his lyrics, as well as Kurt Cobain, which makes sense when you take his emo/grunge-styled deliveries and words to heart. There's more of a Robert Smith delivery by Gepfer on "Tired Of Me" which comes off nicely following "Mary," which acts as a strong punk opener. You sense the effort and heart Gepfer pours in.

While "Tired Of Me" could have done with a bit more energy in delivery, the musicianship remains pretty tight throughout. The variety on the album's sound is most appreciable as "Calculation" has a tight hardcore feel to it, with guitars that stoke! You sense something special here and tell their caliber right off the bat. "Honestly, I don't believe in the comfort and safety of the same routine / And you turn off all your dreams / And I'd like to, and I want to / There's nothing more I'd rather do " exemplifies how good they get. There's a nice layer of backup vocals for that extra edge as well.

By the time "Bright Enough To Shine" rolls around to cap things off, you get the gist of why Gepfer's got a great vibe coming off him. They've cultivated something nifty here and with a more polished sound, you can tell they're gonna be making waves in 2013. Then again, why bother to harness a more refined feel to their music, when what they're doing already seems to be working quite well..