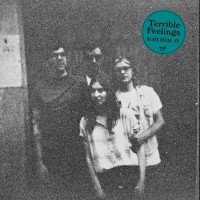 Swedish four-piece Terrible Feelings seem to be causing a commotion wherever they go. I've read a lot about how good the band is on record and in concert, and to be honest on the evidence contained within this release it's a justified view indeed. When I first heard Terrible Feelings, not once did I think I'd end up comparing them to Vancouver's White Lung, but on repeated listens there are moments that match the intensity that the Canadian quartet also display in their music. In addition there is also that late 1970s edgy punk/new wave quality to the music which White Lung also has in its arsenal to enhance that comparison. The differences though would be in the late 1960s/early 1970s rock/garage/power-pop influences that I hear with Terrible Feelings, along with hints of surf guitar throughout. In fact, imagine Night Birds crossed with White Lung and you've got a better idea of what Terrible Feelings sound like.

As a frontperson, Manuela Iwansson leaves nothing in the locker as she shreds her lungs during parts of some of these four songs. It's not just a purely lung fest though as she is more than capable of adding some depth and soul to the tracks when she actually sings, marking out her versatility as a vocalist and ensuring that this is not a one-dimensional affair.

Opening track "The Moon" opens at a fair pace and Iwansson's voice immediately takes hold of me and retains that grasp over the next 10-and-a-half minutes of this EP, not allowing me to direct my attention away from the songs. This first cut has a chorus that brings to mind "Paint it Black" by the Rolling Stones, and as it's my favorite Stones track that kicks things off nicely.

"Trash & Burn" displays, more effectively, that comparison with White Lung, as an edgy guitar riff commences proceedings followed by a more overall frantic and primitive sound, certainly putting the Swedes on a par with the Canadians in terms of a more frenzied approach.

"Blank Heads" slows things down a bit with some prominent surf guitar leads that echo below Iwansson's vocals and closes with her singing "We're damaged" numerous times, highlighting the dark tone of the lyrics within these songs.

"Hollow" begins with the mellowest introduction of the four tracks and shows a restraint not found on the opening two songs. However, despite the significant change in pace, Iwansson still manages to open up her lungs and vocal cords to deliver a throaty performance at times. She sings as if her life depends on it and her heart is firmly on her sleeve during all of the four songs.

It would be wrong to purely focus on the performance of Iwansson here, as her fellow band members do more than enough to show that the band is actually the sum of all four parts, enabling it to create such an enjoyable musical output. The guitars are choppy and edgy as well as weaving subtle leads into song, whilst the bass thunders along as the drums are crisp and precise with some great use of the cymbals. These elements all go together to fire me up and it's a perfect blend of all those components.

Just to clarify, this is the North American version of an EP originally released in Europe in late 2011.

Placeholder: Thought I Would Have Been Somebody By Now

Bad Brains: Into the Future