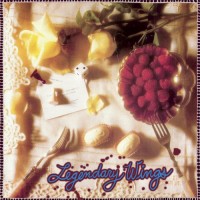 Whenever a new trend in underground music becomes vogue, my initial reaction is to reject everything that comes after a certain chokepoint. For example, any band that describes themselves as "garage-rock revival" and isn't Jay Reatard, the Black Lips or that one Wavves album I really like is getting the automatic stink-eye from me.

Part of the reason for this is that I'm a grouchy old shit who doesn't want anyone to have any fun, ever. The other part, however, is that after a trend is established, bands start forming because they want to capitalize on a particular sound and not necessarily because their songwriting moves them in that direction. Groups become motivated by catching buzz and not by making music. I mean, sure, maybe Dirty Beaches has been writing Roy Orbison revival since 2005, but I wouldn't bet my life on it.

It becomes obvious within seconds that Legendary Wings is not a band moved by trends. Their debut album, Making Paper Roses, is a party of garage-punk that sidesteps any questions of motivation by writing good songs, first and foremost.

If not for the reverb on the vocals, the surf guitar and the tom-heavy drumming, Legendary Wings would be a straight-up pop-punk band in the vein of the Bouncing Souls. Sure, they've got the trappings of band that wants to be the Beach Boys or the Zombies, but songs like "Lover" and "Too Far" reveal that these dudes would much rather be Lifetime.

At the album's best moments, Legendary Wings are creating music that pays homage to the past while sounding distinctly their own. "Lover" and "Too Far" might remind you of a Souls song you swear you've heard before, but can't put your finger on. "Cartoon" and Pure" recall the better moments of '90s pop groups like the Lemonheads and R.E.M., but through a much drunker and more fun lens. "Sun" sounds like the best Guided By Voices song that never existed.

The first two-thirds of the album play like the soundtrack to the kind of "get so drunk that someone rides their bike through a window and into a pool" party that doesn't exist outside of Hollywood movies, which makes the impact of songs like "Dumb" and "Sun" all the more meaningful. Legendary Wings seem determined to be a fun-times band, but lyrics like "Things don't ever seem to go my way / Too fucked up to remember all the things I say" suggest they are more self-aware than their music lets on.

Making Paper Roses is a lot like the self-titled Cloud Nothings album in that a lot of its songs sound the same, but are made so well that it's more of a blessing than a curse. As long as the group keeps its song-craft in front of it, Legendary Wings could be the next good times punk band.

Anchors: Lost at the Bottom of the World