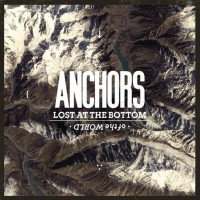 Given their sound, you'd think Anchors hailed from southern California. Turns out they're from another sunny locale, Australia. The band deals in catchy, snotty, angry punk in the vein of Strung Out and Face to Face with a smidgeon of Rise Against sprinkled on top. Much like their American cousins, Anchors also knows how to drop the shreddage when appropriate (dig the riffing on "From Miles Above").

Lost at the Bottom of the World is a remarkably strong record, almost supernatural in its execution. Take a song like "Lazarus Sign" for example. The drums power through a rapid fire punk beat while the guitars aim for something a little heavier and flashier. Yet through all the shouting, there's a hella catchy hook buried with the backing vocals. It's ridiculous. Half a world away, Anchors are killing it.

Running just over a half hour, the record doesn't have much in terms of filler. The only real knock against it is that the songs tend to have the same construction. The drums rarely do anything other than plow ahead really, really fast, generally leaving the showmanship to the guitars. Vocalist Brett Horsley pretty much has one mode: screamy scratchy. It's certainly not a bad style to cultivate, but some might folks might zone out or even consider the songs a little overstuff after a while.

Those complaints are minimal, though. Lost at the Bottom of the World is a rip-rockin' good time for one and all, picking up steam with each track. Next thing ya know, you're bopping along to the breakdown on "Coastlines" before you realize, "Holy sweet gosh dang, this album is almost over."

High on Fire: The Art of Self Defense [reissue]