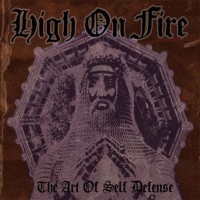 Minus that whole rehab thing, Matt Pike has had a pretty good year. His old band Sleep put out an awesome proper release for the single-song full-length Dopesmoker. De Vermis Mysteriis is the best High on Fire record yet. On top of all that, HoF also reissued their first album, The Art of Self Defense, on Southern Lord. Or, they re-reissued it.

Originally re-released in 2001 on Tee Pee Records with two bonus tracks from a 7", one of which was a cover of Celtic Frost's "The Usurper," the Southern Lord edition tacks on three more bonus tracks on top of that! They'reâ¦oh, they're Self Defense demos. Well, that'sâ¦kind of weak, actually.

Not so weak that this reissue doesn't shred faces and burn houses, though. Even this early into HoF's run, they had shredding ân' sludging down pat. While the band doesn't quite slay heaviness like they would on, say, Blessed Black Wings or Death is This Communion, they still rock hard in a MÃ¶tÃ¶rhead-ish fashion.

If anything, Self Defense finds Pike still transitioning from Sleep. This album is still a little blues ân' psych rock-indebted at times. Not a whole lot, but enough that you can hear an evolution. HoF is also down with the longer songs here. Not Dopesmoker long, but five out of the six songs exceed five minutes. After the epic eight-minute monster "Fireface" comes the even longer, even more furiously epic closer "Master of Fists." The name alone guarantees quality.

Comparatively, the 7" tracks are somewhat of a come-down. They're good, but the expansive sound captured earlier doesn't need much dressing up. The demos are interesting in an academic sense. They're high quality, and the alternate cut of the guitar solo on "Blood For Zion" slays, but they seem to get in the way of just pressing play again. All the same, this is yet another essential Pike release in a year that's been packed full of 'em.

Anchors: Lost at the Bottom of the World

The Snips: Highs of Low