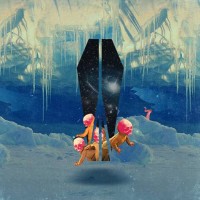 Mysterious new band Peace'd Out wants you to know they're being ironic...at least in name choice.

Following the release of three cryptic videos that slowly revealed details about the band and their debut self-titled EP, Peace'd Out came forward as Steve Choi (RX Bandits), Vinnie Caruana (I Am the Avalanche, the Movielife), Casey Deitz (The Velvet Teen) and Roger Camero (No Motiv, The Warriors).

Though members have stated that the project is "music for fun" and a freestyle exercise of sorts, there is nothing typically "fun" about this brutal EP. Delivering five songs at just under 12 minutes, each track on Peace'd Out stings like a paper cut.

Wracked with frenetic time changes and nightmare-tinged vocals, every song has an element that tells listeners where the band's roots lie. Whether pointing to the harsh angular riffs in "Cha-Chang-Changmail" or the breakdown two minutes into "Castlemania" or even the clipped, desperate shouts in "White Pyramid," Peace'd Out's debut EP pays homage to hardcore legends from Botch to Deadguy to Pg. 99.

Peppered into the mix of math-influenced riffs, however, is an element unique to this EP–an experimentation with electronics that lends to Peace'd Out a dystopian, futuristic quality, as if they're sending warning us of an imminent cyber-apocalypse. No doubt some will decry the harsh electronics as nothing but camp, but it's worth remembering that camp isn't always a bad thing (and, for those who think it is, I'd urge you to watch Blade Runner and not imagine any song off this EP weaving itself perfectly into one of the more dramatic scenes).

Overall, this isn't an EP for the faint of heart–or for hardcore purists–but for the listener who can appreciate Peace'd Out's influences as well as their efforts to incorporate fresh, ferocious elements into the mix and create something entirely new.

The Snips: Highs of Low