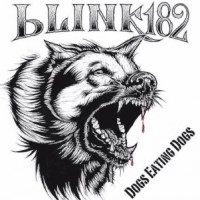 When Blink-182 said that they were working on new material, and we could expect it a lot faster than Neighborhoods, I kind of had my doubts. A lot of bands say that, (Propagandhi, I'm looking at you here) but still take forever to get songs out the door. These guys made good on the promise this time, and I am really happy with the results.

Does Dogs Eating Dogs sound like Neighborhoods? It does, in a lot of ways. The guitar tone and layers are definitely still there, and Tom's voice is still Tom's voice, for better or worse. The thing that had me excited for this EP was that they were actually going to be recording together instead of in separate states and recording rooms. I think it definitely made for a more cohesive set of songs than their previous effort. And the songs overall are much more up-tempo than the last album.

The opening track "When I Was Young" starts off with a soft keyboard intro, but picks up the pace fairly early on in the song, and features some nice drumming from Mr. Barker. The chorus is satisfying, with Tom doing the brunt of the singing, and Mark chiming in "It doesn't matter." The second track, "Dogs Eating Dogs," is a Mark song, and is one of my favorites on the EP. It does bear mentioning that the track comes plagiarously (is that a word? It is now) close to a +44 song called "Lycanthrope." But hell, two thirds of Blink were in that band, and I happened to love that song too. And Tom sings an excellent chorus including the lyrics "I am numb to the shot / I have a crippling fear of heights / 'Cause the fall sounds a lot like a symphony of cries." All in all, I think the lyrics on the EP show a ton of growth from a band that wrote "It's Labor Day and my Grandpa just ate seven fucking hot dogs / And he shit, shit, shit his pants / He's always fucking shitting his pants."

"Disaster" is a little more low-key than the first two tracks, but has a nice swirly sound to it, and again has Tom and Mark singing together. You get the feeling that they actually wrote these songs together instead of emailing bits and pieces back and forth. "Boxing Day" was the first song released from this EP and is an acoustic number sung by Tom. It reminds me a little of one of their hidden tracks from Take off Your Pants and Jacket, and has one of my favorite (though sad) choruses they've written in a while, with Mark plaintively singing "I'm empty like the day after Christmas / Swept beneath the wave of your goodbye." A beautiful little tune.

When I saw that the closing track was featuring someone named "Yelawolf," I was more than a little worried this would be some hip-hop Travis Barker-infused mess (I also have to confess I have no idea who Yelawolf is). I was pleasantly surprised to find "Pretty Little Girl" is a new wave-influenced song with a neat muffled picking piece throughout the verse, and pretty traditional Blink chorus. The rap bit at the end I probably could have done without, but I'm not much into hip-hop. It's got a good flow, and it's pretty cleverly rhymed, so I think it may end up growing on me.

All in all, I have to say that despite my doubts, this is a "return of Blink-182" much more than Neighborhoods was, and if you like Blink-182 at all, you owe it to yourself to give it a thorough listen. Dogs Eating Dogs is going to be one of my EPs of the year, I'm quite sure.