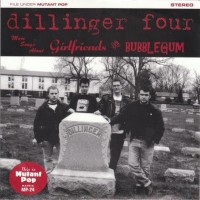 "Fuck You, Ms. Rochelle" kicks the EP off with a strange sound byte which is a staple for most D4 records. After that, Paddy's simple but fantastic bassline comes in with reckless abandon and the rest the band soon join. Paddy then sings some of his best lyrics in a storyteller style, telling a real and compelling story about social stereotypes. After "Ms. Rochelle," the best songon the record kicks in in "An American Banned." With its dynamic opening, catchy chorus and interesting key change at the end of the song, it shows D4's songwriting talents are nothing short of amazing. The lyrics on "An American Banned" are also some the best sociopolitical lyrics I've ever heard.

Then the record shifts gears to Erik, whose songs obviously differ from Paddy's. "Thanks For Nothing" is first of his songs and it kicks you in the stomach (metaphorically, of course) and lets you know you're in for a hell of a ride. It features some of Erik's best vocals, and is in a tie with "An American Banned" for catchiest chorus on the record. The song never lets up and features a great mini bass solo from Paddy which leads into the closer "Twin Cities Sinners, United." The song starts a little bit softer than "Thanks For Nothing" before vaulting into gloriously dirty pop-punk territory. The song's lyrics criticize religion and revel in the fact that they are giving the finger to God and his followers and it is a great closer to a great EP.