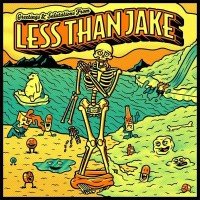 For all intents and purposes, Greetings & Salutations, the new release from ska-punk lifers Less Than Jake, could be considered a new full-length in the same way one views the Bouncing Souls' Ghosts on the Boardwalk. Comprising two limited edition, tour-only EPs and two brand new tracks, it's a fitting way to wrap up the band's 20th anniversary celebration. Here's classic LTJ for ya'll.

Given that the material was all conceived around the same time-ish, the collection sounds pretty cohesive. It even has an ebb ân' flow vibe spread around its 12 tracks, further strengthening an argument for treating it like a proper LP. Oh, and it's good. At this point, LTJ doesn't necessarily need to reinvent themselves, but it's still nifty hearing Chris Demakes and Roger Manganelli come through the speakers as clear and powerful as ever. These tunes are in the classic tradition of Hello Rockview and Losing Streak, with "Life Led Out Loud," "Harvey Wallbanger" and opener "The New Auld Lang Syne" particularly standing out.

Of course, the record does have little signs here and there indicating that it wasn't fussed over as much as a real full-length might have been. In some ways this works out; I love GNV FLA, but it was a little too polished. Greetings sounds solidly produced, clean but not oppressively so. It's not particularly punchy or flashy, but it suits the material.

The flipside to this quality, though, is that the songs sometimes come off a little undercooked. Musically, it's great. LTJ know their formula. But lyrically, they stick to their common topics too much (losing, being stuck in the same dang town), and rely heavily on clichÃ©s. This is especially egregious when the band try to sell them on the chorus, like the "Who died and made you king?" hook from "Goodbye Mr. Personality." It's not bad, just not particularly inspiring.

It's for this reason alone that Greetings & Salutations is held back from being truly great. Otherwise, this is exactly what fans want and need: twelve more ska-punk gems to rattle their brains. Happy anniversary.