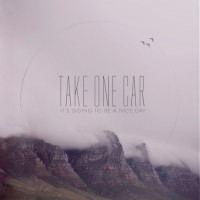 Really wish I had gotten wind of this earlier this year to slip into my top 20 list for 2012. Take One Car impressed me on When the ceiling meets the floor a few years back and while it seemed a tad convoluted, I could tell they'd be a band I'd really like with some minor improvements. So said and so done, as this record really came full-circle and brought out the best from the New Yorkers.

They've refined their best elements here and tried to do away with the flaws and faults of the last effort, and there's a more than decent effort put in. "It's Going to be a Nice Day" sets the stage as a deft instrumental opener that offers a warm, comforting, soothing sound similar to The Paper Kites, Slingshot Dakota and The World is a Beautiful Place...

There's a great blend of melodic post-hardcore and indie-alternative that comes out drastically on "Dear Ronnie." Tyler Irish's brooding lyrical delivery is a major strength of the band that evokes the emotion that Geoff Rickly, Andy Hull and Nathan Hussey manage to pull in their respective projects. What's even more shocking is that this isn't even the best thing about the record–that would be the dynamic guitars of Pete Scholes. He and Irish, also on guitar, really add a great weight and powerful momentum to the band, and you sometimes find dark tones that Arcade Fire and Interpol tried to drop in the earlier days.

"I know why you went into the Woods" again represents that calloused tone from Irish, complemented well here by Ryan Saldiarraga's drums. The balance between chaos and melody is well established throughout the record and there's also hats tipped toward the metal persuasion as seen on riffs from "So Much In Return." "Ocean Song" and "Brim" also add to the haunting and mesmerizing feel on the album, but by the time these songs carve their signatures, and impressively at that, the latter half of the record once more sinks into the little niggles from their debut album.

They once more dropped the compelling and memorable stuff a bit early and as much as they've managed to keep things cohesive, as there are small layers of disarray to the record's end as the tracks seem slightly too long. They aren't bad but some just strain a little. They've got some amazing riffs swirling as well as clouting hooks, don't get me wrong, but some songs seem corroded with their lengths. "Yet Another Voyage' and 'In the Company of Wolves' suffer through this prolonged duration, and if shorter, you could tell how solid they'd be.

That aside, there's no frustration or misguided straying from track to track as there's a singular direction by Irish that he's playing from strength to strength in the stories he tells. You're definitely left scratching your head as to why there wasn't more recognition for this record. To me, it deserves to be noted more; there's something special in this sophomore effort and I can't wait to see how they progress from here.

Anti-Everything: Children of a Globalised World