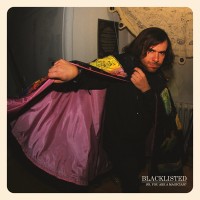 I think Blacklisted is on a very short list of bands that matter.
-Patrick Kindlon

Man loves his hyperbole, but on Blacklisted, he's no bullshitter.
In America, So, You Are A Magician? is a 3 song 7-inch or digital download. In Japan,...Magician
America:
Recorded cleanly in Will Yip's Studio Four, ...Magician sounds, for want of a better descriptor, more punk than the No One Deserves To Be Here More Than Me sessions. It's less ornate than No One.... Every instrument sounds like it's supposed to. The drums sound crisp, the bass like it's being exhumed out of a swamp and the guitar noisy.
Of the three new songs, "Mentalist" and "Copper Fields" are aggressive and fairly straightforward. "Copper Fields" is also Blacklisted's best song to date. It's just as strong lyrically as "Skeletons," as catchy as "I Am Weighing Me Down" and hits Joe Strummer's sweet spot of 2:59. iTunes says I've listened to it thirty times. That number sounds low. I'm scared to see what my cell phone says about that number. It could double that one, easy. I don't think it's Blacklisted's first foray with a verse chorus verse chorus structure, but the elements that comprise it are stronger than any other song they've written to date, I think.
"Houdini Blues" is a song about suicide, a slow, bluesy number, via sludge. It's a little melodramatic, but hey. It's a song about suicide. The band earn it. "Houdini Blues" reminds me vaguely of Life Long Tragedy's "Hey Death," in that it explicitly and morosely invokes the reaper.
I think what's strongest, or at least most interesting about ...Magician is George Hirsch's use of stage magic and slight of hand as a metaphor for his relationships. "The tricks / not smoke and mirrors / no trap doors / no disappearing / there's no illusion / to what you feel / is real." Despite whatever parlor tricks Hirsch may claim to employ, he seems also to be saying that he's no conjurer, the love (along with the hate, one presumes) is authentic. "Mentalist" is the most candid of the songs, "Copper Fields" the most dedicated to theme and "Houdini Blues" balances the two.

Japan:
The other three or seven songs are two post-No Oneâ¦ songs, an interesting but not definitive demo of "Stations" and what I take to be the BBC session. Technically, the BBC session is the work of an error of unspecified origin, presumably not to be reprinted by Alliance Trax.
Of the two newish tracks, "Those Shields Around You" is the standout and stands as another highlight in their discography. It catalogs Hirsch's attempts to penetrate the emotional defenses of a woman while acknowledging their disparity in interests. "Do you still believe what they say about my sign? / A Virgo, modest and shy / You grow gardens and love cats / I listen to Stephin Merrit and believe in vampire bats. Little do our friends know, this is us both at our most irreconcilable. Those shields / Those shields / Those shields around you they do nothing but confound and bound you."
I'm not sure I would buy the BBC session on its own, but I crave truly complete discographies I'll never give another listen to. The band jam out a bit on "Circuit Breaker" and trims a good half minute of guitar feedback from the end of "Shields." The trimming was a wise move, I think.

I'm filing the CD in the b-sides collection folder of my mind, but right now, it's a valuable snapshot of yet another Blacklisted taking form. For you? Don't wait for the inevitable Deathwish collection, go grab this from Six Feet Under however they're hawking it. And since Deathwish, it appears, does SFU's digital delivery now, you'll be going to Deathwish anyway. The music's great and Hirsch's only growing stranger.
Since Peace On Earth, War On Stage, Blacklisted's a band that mutates from LP to LP (like our beloved Crime In Stereo or even Kindlon's own Self Defense Family), so it might be a whole new sound by the time a person gets around to buying the new record, which makes breather moments like this a great time to catch up.


(Like my Darker Handcraft review, I published this first elsewhere, this time at my blog and cleaned it up for punknews. I'm bummed not to have Jordan as an outlet for this stuff. XO, Jim.)