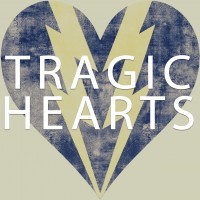 Ah, the simple pleasures to be found in a fistful of some solid pop-punk! This Toronto-based band featuring two members of The Victim Party in Dean Richards and Pat Mathers (the former was also intThe Artist Life whilst the latter is also to be found in Hostage Life) certainly manages to get my feet tapping, my head nodding and having me get the air guitar out of its case, as they open up with an opening riff on "Havelock Street" that is nothing other than pure Johnny Ramone. In fact, that one reference should be enough of a pointer to get you interested (or not) in Tragic Hearts. However, it's far from being a total Ramones lovefest in here, as there are also nods towards many other bands that have also taken a huge influence from one of the greatest bands that ever graced a stage: Screeching Weasel and their ilk coming to mind frequently across these three songs. In addition to that on the final, and title, track the whole pulse of the song, the vocal delivery and the drive of the guitars manages to throw the Movielife and also I Am The Avalanche (more the second album) into the mix too.

Despite the upbeat nature of the music, scrutiny of the lyrics actually identifies perhaps why the band's name might have been chosen: there are clearly tales of lost love and the word, or variant of, "drown" features three times throughout these songs, and that's never a positive reference. The downbeat lyrical content, however, does nothing to take away a general ebullience that I get from listening to this release.

To summarise Tragic Hearts debut, one could ask (and answer) three questions:

Is this breaking any new ground? Well, no it's not; it follows a fairly solid pop-punk formula which has been around for quite a while.

Is this an essential purchase? No, but if you have any interest in any of the bands above then I'd recommend giving it a go. What have you got to lose when there is more to gain?!

Is this a good release? Hell yes it is! This is high energy, full on melodic punk rock, played and recorded well. It's fun to listen to and without a doubt worth checking out. What have you got to lose?

Too lazy to search for it? Then here's a handy link to the Bandcamp page.