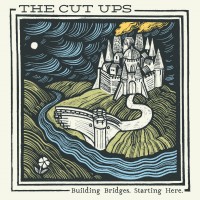 The Cut Ups hail from Exeter in the county of Devon (or âDevonshire' if you're American) in the southwest of the UK. Buidling Bridges. Starting Here. is the band's third album and it's their finest work so far. Across eleven tracks the band, hugely aided and abetted by the likes of Franz Nicolay and Pippa Wragg Smith, deliver some quality songs with more than enough variety to ensure that nothing gets bogged down with hints of repetitiveness.

It is clear that over the years (eight), the Cut Ups have been honing their skills, both in terms of live performances (which are rarely anything less than enjoyable â helped mostly by frontman Jon Curtis, who delivers lyrics in a heartfelt and sincere way, yet is able to keep the gaps between songs equally agreeable) and also the more key aspect of songwriting to reach this stage, and it's pleasing to hear a band that is still evolving after that length of time together.

Although many, including myself, actually like the band's hometown as a place to occasionally visit for non-gig activity, it's obvious that the shift in the majority of towns and cities across the UK from being individual to having homogenised high streets, is one that rankles with Curtis and Co. As such, there is probably no more suitable title for the opening track than "Exeter" in which Curtis bemoans the "clone town" and its recent gentrification. And to top off a fine song, it's great to hear keyboards and violin sitting nicely within the heart of this track and doing so with remarkable ease, somehow making this even more of a protest song.

Across the album, it's an undeniably British punk rock sound that is heard, although I have to applaud the band for the inclusion of keyboards on a number of songs: I find that this instrument has the ability to add a lot of depth and soul to music, and there is no reason why this cannot work with punk rock too as it quite clearly does here. Curtis's vocals are perfectly matched to this additional instrument, adding warmth with his very distinctive voice, which is far from crisp yet equally far from being rough and gruff. It's not all about Curtis either, as vocal duties are taken on by Dan Heron on the tracks "Building Bridges" and "Teenage Danclub," with Pippa Wragg Smith (who has also been found providing vocals in Annalise and the Winter Olympics) having lead vocal duties on "Another Bad Mood" as well as providing backing vocals at various stages of the album. In fact, the Curtis / Wragg Smith vocal combination is one that does add a kind of folk-punk protest feel to some of the songs, and even adds a small 1960s vibe to the record whenever they pair up to sing.

The Cut Ups crafted a mid-paced punk rock record that is heavy on the melody and high on the message (be it political, social and/or personal) contained within the lyrics. The guitars sound both chunky and crisp enough to be part of the music rather than take over and leave little room for the rhythm section, whilst the bass and drums add the right blend of fills to ensure they're making a solid and purposeful backbone for the band. The production allows the songs to breathe without any one aspect taking over and although it retains a rough quality, I feel it's a much better job than on the previous long player The High and Mighty, which sounded a bit too muddied for my liking.

On each listen I find a new favourite track on this album; it started with "Torches," moved onto "Srebrenica," then it was "The Pacifist's Hymn" (an excellent song which reminds me of the long forgotten Hazel at times) and also "The Gold War" and it's never the same song on consecutive plays.

As previously noted, this is the work of a UK band but nonetheless it would equally sit alongside many American bands without seeming out of place; the Cut Ups are definitely a band that could cross the Atlantic with ease and if pushed, I'd say they're a cross between some of the releases that come out on the No Idea, Kiss of Death and Dischord labels (the latter more from message and ethic than a direct musical comparison). Building Bridges. Starting Here. is one of those albums I wish I'd heard prior to compiling my Top 20 lists for 2012 as it would certainly have made it in with ease. Don't be daft enough to ignore this record.