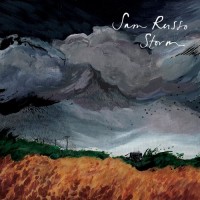 Through his debut LP titled Storm, Sam Russo defines a personality that offsets generous and endearing moments with sounds well defined in modern British and American punk vernacular. This accomplishes one of two things: the upshot being that his delivery eases us into his songs with a well-worn likeness, only to carry the listener to a point of self-invention and understanding. The other, however, is a suboptimal situation where Sam Russo's familiarity is written off as imitation.

The finer points of Storm are the more tender aspects, such as "Cold Feet," "Holding On," and "Get On Home." They're candidly unforced songs that showcase a holistic Russo, and allow the listener the acquaintance that is required of a worthy initial offering. These stylings offer a sincerity that is innovative, such that they may even be reminisced as such down the line.

Despite the earnestness on display, some songs fail to meet the quota set by others, revealing troughs among peaks. With variants of country, blues, and existential stuffs, some aspects of Storm sound as if they were written with a full band in mind, but were recorded solo. While these variations might work in that context for now, the true gems are more "Dead End Roads," not "Factory Rain" or "Dry Shampoo.".

Sam Russo offers a contemporary style not unlike many of his famed peers, but other aspects of Storm channel Damien Rice and John K. Samson, offering diversity through comparison. Ripe with the right sort of sensibilities, Russo's voice trembles under a controlled weight that resonates with a precise purity. Naturally, it is his voice that conveys his character best, drumming up the sort of sentiment that has the potential to inspire a generation.

Mucca Paza / Mischief Brew / On the Wate: Live in Philadelphia