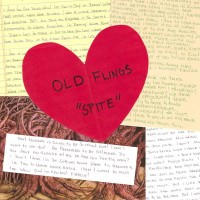 Spite is the first full-length from North Carolina punk by way of â90s alt rock act Old Flings. I saw this album for sale at the Fest flea market back in October of last year and had heard it was good, but I felt like I needed beer money more than another record to try and fit in my carry-on to take home, so I did not buy it. What a stupid mistake.

We've had a ton of bands like this pop up in the scene recently, but I'm convinced that nobody has truly perfected it like Old Flings. Spite is 11 tracks of rip-roaring jams that make any place turn into the back porch outside of a house show. It's weird. I can smell the drunkenly-bummed cigarette in my left hand and taste the beer in the solo cup any time I put the album on the turntable. There's something about this album that just feels that way. Maybe it's the vibe they want, or maybe it's not. Regardless, it's what I get from it and it's not a bad thing at all.

Sonically, it's a pretty rockin' album. It's got catchy hooks and riffs for days and you're going to wake up at some point humming "Merry Go Round." It's going to happen. The vocals sound rich and at some points bring out a Morrissey-esque feel to them ("Studded Jackets" and "Couch Song" immediately come to mind). The rest of it reeks of â90s alt-rock and is a well-traveled trip down memory lane. While this isn't for everyone, it has a charm to it far beyond the one sort of stylistic trait that I've put it in.

From a lyrical standpoint, this is one of the better break-up albums I've listened to and let me tell you, I've listened to a lot. "Grip" is definitely one of the best long-distance relationship songs that would go perfectly on a mixtape when your girlfriend is about to go off to school at some fancy-pants university and you're still stuck in wherever with your mediocre job. The title track and closer, "Spite," is the pure extract of bitterness from the end of a relationship. It's sickeningly good.

I finally got the LP in a Black Friday sale, and while I wouldn't normally get into LP packaging, let's go into it, shall we? The cover art is awesome with the old love notes all around and those are faithfully reprinted on the album labels. Inside was a very nice note from Bitter Melody for supporting their first full-length LP release. Not a ton of labels do this, but it's always nice to get something like this and you can't help but like a fledgling label that's dedicated to its supporters.

In conclusion, Spite is one of the best albums of 2012. While I'm realizing it a little bit late, it is an album that's holding a pretty special place in my heart. It's an original take on a tried and true formula that makes other bands in the genre look plain in comparison. All of that, combined with the fact that this is only their debut, makes Old Flings an exciting band to watch in the future.