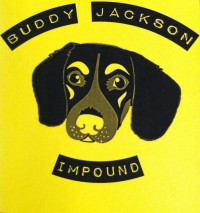 Buddy Jackson was born from the ashes of a couple of Montana bands that seemed to rise and fall around the same time late last decade. While listening to the Impound EP, it is obvious that things just fell into place from when the first note was played. This Missoula, MT garage pop trio heavily emphasize and stick to the two-minute jangle rock format. The songs are short and tight and the melodies will stick in your head all day. They tends to emulate mid '90s pop while adding an element of stripped down modern pop-punk (i.e. Joyce Manor, Kudrow, Toys That Kill). The production of the album is lacking, however it can be argued that those faults add to its charm.

The common lyrical theme to the album is beer, girls and longing for which of those is now gone. The two standouts on the album are the rollicking "Glass Ceiling" and the introspective "Cutting Room Floor." The former is a song that builds on its simple yet punchy intro into a well-structured rocker about going nowhere. The latter is the longest song on the album clocking in at a walloping 2:24. It is the most emotional song on the album discussing how partying and socializing can be the two most alienating activities.

I am excited to see what will come from this band in the next couple years.