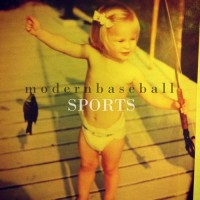 Modern Baseball show their young age on Sports, especially lyrically, but musically they're wise beyond their years. This record resides somewhere between the quirky pop sensibilities of Motion City Soundtrack, the bluntness of the Front Bottoms and the idiosyncrasies of Say Anything. Or maybe a Troubled Hubble for the 21st century; does anyone else remember them? Regardless, there's a lot of personality exuded on Sports, making for a pretty captivating listen.

The foundation of Modern Baseball is guitarists/vocalists Brendan Lukens and Jacob Ewald; their voices portray a certain balance of youthful exuberance and a faint awkwardness that, more often than not, fit the lyrical content like a glove. There's also a certain looseness inherent in the band's sound that keeps things interesting, though it's likely a calculated move on their part. There are odd pauses interspersed with jubilant gang vocals ("Re-Do"), plenty of clever wordplay ("Tears Over Beers") and a whole bunch of social networking references ("@chl03k," "I Think You Were In My Profile Picture Once") which seem a bit campy at first, but are far more indicative of how this generation is growing up and dealing with relationships than anything else.

Modern Baseball incorporate heavy emo tones into songs like "Hours Outside In The Snow" and "Re-Done," with twinkly guitars, heartfelt vocals and impressively busy drumming (especially in the latter). It's the kind of stuff kids obsessively following the No Sleep/Topshelf/Tiny Engines rosters are eating up.

There's a nice bed of acoustic-based tracks mixed into Sports, too: the aforementioned "Profile Picture" as well as "Cooke" and "Play Ball!" give the record an added layer of sonic diversity and showcase MB's range of moods pretty well, especially when surrounded by stuff like the concisely catchy pop-punk of "See Ya, Sucker."

Most bands this green aren't fully realized in terms of their voice, and that's certainly the case with Modern Baseball. But with Sports, they've laid an impressive foundation for the future and it'll be interesting to see where the band go from here. Based on the potential they seem to have, it'll likely be up.

Foxygen: We Are the 21st Century Ambassadors of Peace and Magic