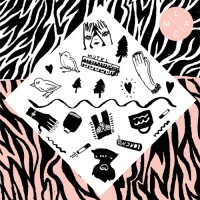 Because both Hunx and Cassie Ramone nod to the early garage rockers and girl groupers without manufacturing strict copies, it's suitable that they teamed up for a split 7-inch release. And because each of the songs deal with lovers being pulled together or torn apart, the split works well.

Hunx's "I Won't Tell If You Won't Tell" maintains the momentum he created on his last LP Hairdresser Blues. Built around a garage rock riff and ambiguous lyrics, Hunx talks about keeping some sort of sensual interaction secret. Because Hunx is sort of an Oakland gay icon, the interaction is pretty obvious; though he deftly does keep it ambiguous enough so that the lyrics could apply to many different situations, much in the lyrical style–though not sound–of late '70s Judas Priest. The guitar lines are the most interesting aspect of the song. A thick wavering, the guitars hover between Joy Division post-punk dread and East Indian strings. It's a connection that hasn't been made before and it works well. Still, although the song fits together, it never really gets beyond its starting point. The songs simply ends on the same riff that it started and with the same refrain. It's a good tune, but with some more effort it could have become a classic.

Interestingly, Cassie Ramone's "I Don't Really Want To Go" first suggests that like Hunx's tune, it will be a fun, lo-fi rip through. But its central twist takes it from being good to being great. The song starts off with a quiet guitar line and Ramone singing in her wonderfully, unique raw voice "Baby don't go." It suggests that she's pleading to a lover that she doesn't want the relationship to end. But then, just as the song seems to be a single leveled construct, out of nowhere, a whirling, sci-fi sound effect tears into the acoustic guitar as Ramone pleads "I don't really wanna go!" As the sci-fi effects grows in intensity, the guitar goes from a soothing strum to a twisted screaming. Is this song about heartache, or is it about getting abducted by aliens? Is it about both? The way the song grows and twists, suggesting multiple readings without giving an exact definition makes it one of Ramone's finest experiments to date. Also, the fact that it has that one weird-as-hell section doesn't hurt either.

Mostly, these are fun tunes that don't set any loftier goals than just being what they are. It works well. Recommended for collectors.