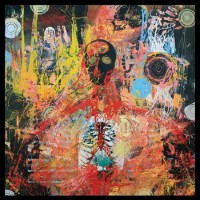 Funeral for a Friend

Funeral for a Friend have been one of those bands that never stuck to the same sound. They've traversed the hardcore-metal feel at times and gone the way of more melodic rock on some records, but what's good to note is they've always been a technically sound band and one that executes brilliantly. As a fan of Casually Dressed and Deep in Conversation, the changes as they moved from Hours and into, most recently, the See You All in Hell EP, showed that the band pride themselves on versatility and homages to their influences. Changing the emblematic sound for so many albums won't work for most bands, but FFAF manage to capture the magic and essence of what made them appealing to their fans in the first place. Conduit prove no different as it's the FFAF that fans first fell in love with.

There's more of the aggression than the melodic side here. Ryan Richards' drumming was one of the key factors in that aggressive aspect of FFAF and when he left last year, how they'd fare in getting this vibe across was up in the air. Well, Pat Lundy not only delivers in spades, but he matches fully what Richards brought to the table. In fact, he steals the show on the record. Tracks like "Conduit," "Best Friends and Hospital Beds" and "Nails" exemplify Lundy's prowess on the kit. There's still the amazing hooks and speedy riffs ever-associated with the band of course, but Lundy adds that needed edge with his quick hands and heavy double-kicks.

Matt Davies-Kreye's vocals are, as expected, up-to-scratch, amidst the hardcore-styled moments of Conduit. There are bits and pieces of the harmonics and melodies they delivered so soundly about a decade ago, but it's the thrashing sound that really takes us back to the best of them–fast-paced and violent. "Death Comes To Us All" displays this fully and gives the right blend that FFAF emit so well. Same for "Grey" which recalls the band's best moments on Seven Ways to Scream Your Name.

Even when they deviated to a more catchy yet metal-riffed vibe, FFAF always had a likable musical aura to them but as many die-hards would argue, their true strength lies in a record like this–frenzied and energetic. The louder and harder style of play just fits them more. "High Castles" rounds off the album nicely and proves a great representation of what they stand for, lyrically and musically. Cheers to Funeral For A Friend for delivering one more for the fans that clamored their vintage sound. They really proved that they're a conduit for great music and a band that's chomping at the bit to explore and vary their style. It's another great album to kick 2013 off with a bang.

[Editor's Note: Conduit is currently out in Europe via Distiller; a North American release will be happening Feb. 5 via The End.]