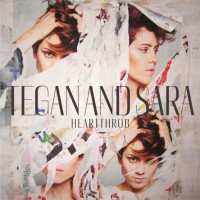 Tegan and Sara wrote an unabashedly mainstream pop record in Heartthrob. Their indie rock and punk roots, which remained present over the years even as the duo's music became more accessible, have completely left the picture. (For those scoring at home, the best amalgamation of T+S' underground roots and pop tendencies was 2007's The Con. It's also their best album overall.) The question is: Will anyone care? Will their passionate fanbase, large by most measurements but smaller by a mainstream barometer, follow them down this path, or will they exit, feeling alienated by this new direction? Will new fans, music consumers who get their tunes from the radio, television commercials and the like, welcome them with open arms? What's the endgame here?

As far as the actual music on Heartthrob goes, it's mostly solid when one factors in intent. It's clear Tegan and Sara set out to make a pop record, and it succeeds in that realm. The club-ready hooks in songs like "Closer," "Goodbye, Goodbye" and "I Couldn't Be Your Friend" are undeniable, if a bit standard in their execution: They all rely heavily on canned, electronic-sounding percussion and plenty of synthy sounds, with a craftsmanship that's decidedly commercially influenced. Still, a good pop song is a good pop song; it's hard to imagine anyone walking away from these offended, at least.

In other areas though, the duo struggle to inject personality into songs that desperately need it in order to stand out from the crowd. "I Was A Fool" features a piano part that, in some iteration, seems like it's been part of twenty other radio hits before it. Same for the acoustic guitar and vocal melodies in "So They Say," and some of the lyrics ("You don't need to wonder / If love will make us stronger / There's nothing love can't do") are too cloying, even for this type of music. Tegan and Sara just don't quite exude enough personality into these with their distinct voices; for the first time in their career, they seem to be playing down to the competition.

That's not to say all the ballads on Heartthrob fall short. "How Come You Don't Want Me," co-written by Jack Antonoff of fun., is that extremely sad song full of emotional longing that T+S have perfected over the years, just through a poppier lense and without all the restraint. "I'm Not Your Hero" blows out its chorus rather impressively from the verses with some neat, alternated instrumentation.

It'll be interesting to see how Heartthrob plays among Tegan and Sara's fanbase, and to the masses for that matter. It seems to cater more to the latter than the former, and while that's not an inherently bad thing, it certainly could backfire and end up as the outlier in their discography. For now, call it a calculated risk that mostly works.