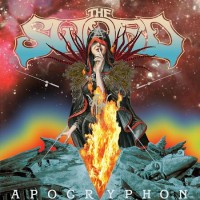 With each successive release, the Sword have pulled their music in two seemingly opposing directions: they've become more accessible, but they've also gotten weirder. There's nothing on Apocryphon, the group's fourth full-length, as heavy as what the band were pumping out in the days of Age of Winters, and they've certainly got a knack for melody that they didn't in those days, but they're more willing to take their music places that rock radio most likely won't be willing to go.

Tracks like "Cloak of Feathers" and "Arcane Montane" have a bluesy swagger that expands on the direction they hinted at with "Lawless Lands" from 2010's Warp Riders. The southern boogie vibe makes a lot of Apocryphon feel like a really heavy Clutch album. There's a few deviations from this formula however. "Hawks & Doves" has a serious Shout at the Devil vibe, and is probably the most straightforward rock song the Sword have written to date. The epic, album closing title track features a spacey synth intro not unlike Ghost's "Genesis."

The vocals of J.D. Cronise have never sounded more clear and confident than they do on Apocryphon. He's crooning at a near '70s Ozzy level here. This clarity gives the album an air of accessibility not felt on past releases, and it allows the listener to more clearly focus on the lyrics, which are mostly about holy mountains, swords, dragons and the like. For most bands this would be painfully cheesy, but with the Sword, it's half the fun. The rest of the band are at the top of their game as well. The Geezer Butler-esque bass intro to "The Hidden Masters" may be Bryan Richie's finest moment captured on tape thus far.

There's a bonus edition of Apocryphon available, featuring several solid but not essential live versions of earlier Sword tracks. The real reason to pick up this deluxe version however is for the group's cover of ZZ Top's "Cheap Sunglasses." For some reason, when metal bands cover ZZ Top it's always a good time. See also: Mastodon's version of "Just Got Paid."

Apocryphon is another great record from a band that have managed to retain their identity while taking their music in many interesting directions. The sound is crystal clear (Thanks to the production of Mr. J. Robbins. Dude needs to produce more metal bands.) and the group aren't as aggressive as they once were, but the songs themselves are some of the finest yet from one of modern metal's most exciting acts.