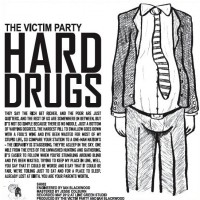 Toronto's The Victim Party is back with a short but sweet two track single which sees the band cranking out more melodic punk tuneage as was found on last year's album The Worst Party on Earth. Thankfully, here's one band that doesn't want to branch out from a pretty successful formula: it's about big guitars, a pumping rhythm section and twin vocalists, something that works well for the band and is in no need of any tinkering.

First up, depending on which side you choose to start with, is "Hard Drugs" on which Tabi Irani is the more prominent vocalist and once again proves that she has a fantastic voice, which is distinctive and more than effective especially when joined by her husband, Colin Lichti. Both voices are widely different but complement each other more than enough to make the duo element work.

Additionally the song opens with a great verse:

It's efficient and effective in identifying the situation that many people perceive themselves to be in.

As good as "Hard Drugs" might be, it is surpassed in quality by "Soft Drinks" which has an even more revved up approach and features more of a shared vocal performance from Irani and Lichti. Whereas there was the occasional moment in the previous track that reminded me of one or two songs on the album through some of the chord progressions and the path of Irani's vocals, that doesn't happen here and I think that helps make it the standout track.

If you like well executed and anthemic, melodic punk rock, especially that which features a particularly strong female vocalist, then this should be right up your alley, subsequently becoming a no-brainer in terms of making a purchase.

For anyone who cares, Safe Haven Records is run by Kieran Meyn of the Toronto band Bathurst.